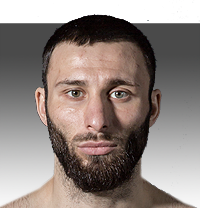 Davit Kiria originally hails from Georgia and often sports a thick beard which gives him something of a Spartan appearance.

He likes to fight at a high pace and can be very aggressive, freely entering into brawls when the opponent tries to take the fight in that direction. Currently he is based in Holland and trains under Semmy Schilt and Schilt’s own coach Dave Jonkers.

Like Schilt, Kiria is an Ashihara Karate stylist and holds a black belt in the discipline. His karate background and training gives him a unique sense of timing and distance which can be tricky for opponents to deal with, especially if they have not encountered a karate fighter before.

Kiria was something of a dark horse when he entered the GLORY Lightweight Grand Prix in 2012 but by the time it was over he emerged as the tournament’s breakout fighter. Fans loved his all-out aggression and his use of rarely-seen karate techniques such as the rolling heel-kick.

Karate is very important to Kiria.

"Two times a week we train in the gi, traditional karate. I will never stop this, I am a karate fighter for life," says Kiria. "Its similar to kickboxing except that we don’t wear gloves and so we are hitting below the neck, but very hard.

“You have to be tough for this style. Its similar to Kyokushin. Ashihara is a hard style. You take some hard hits but it makes you tough. Its important to me to show that Ashihara is a good fighting style and that it can be used with success in the ring."