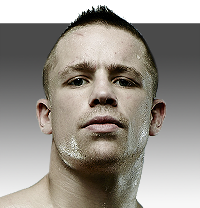 Jordan Watson might just be the best kicker in the GLORY lightweight division.

His timing and placement are impeccable and he puts massive power into each blow. Watson relentlessly punishes his opponent’s legs and body with kicks over the course of a fight and is always ready to take any opportunity to go upstairs and land a head kick, often with spectacular results.

Legs are key to Watson’s strength. His team mates call him ‘Quadzilla’ because of the size of his thighs. He has huge thigh muscles and it is these which power his ferocious kicks, knees and jumping attacks. He is also extremely tough and can absorb a lot of punishment.

Watson has trained and fought extensively in Thailand and has gained the respect and admiration of Thai fighters and fans alike. Watson is a playful character, always joking around, and he brings an element of that into the ring with him. He likes to play tricks and entertain the crowd while hammering his opponent.

Fighting at lightweight, Watson is in one of GLORY’s most talent-stacked divisions, featuring the likes of Albert Kraus, Andy Ristie and Robin Van Roosmalen. But he is eager to test himself against them all and wants to climb the ranks and earn the right to match skills with world-ranked number one Giorgio Petrosyan.