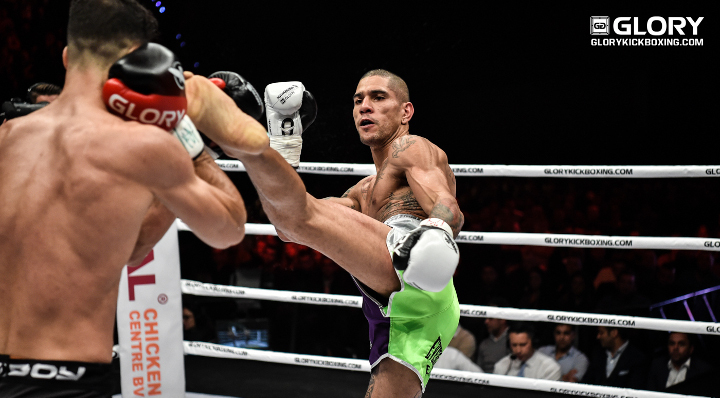 Alex Pereira retained his world Middleweight title in the third round of his contest with Dutch rival Yousri Belgaroui.
But it was far from a comprehensive title defense and when the Brazilian champion reviews the fight on video, he will surely be struck by how close the belt came to changing hands.
Belgaroui and Pereira fought at GLORY 40 in the final of the Middleweight Contender Tournament.  Both fighters landed well but Belgaroui had the running of large parts of the fight and ended up with a unanimous decision win.
He was confident that he would repeat the victory in this rematch, only in even more dominant fashion. Belgaroui felt he had robbed himself of a finish in Copenhagen by crowding in too close and smothering his own work when he had Pereira trapped in a corner.
This time, he said, he would keep things at the distance he wanted and use his range of weapons to secure and emphatic victory. And in the first two rounds he kept to his word, controlling the range and scoring well.
After two rounds Pereira was up on the scorecards and looking confident, although his temper was rattled at the end of the second round by a late blow from Pereira after the bell sounded.
Things changed in the third though. Pereira is a notoriously heavy hitter - former champion Artem Levin said he’s the heaviest puncher he ever faced - and he started to find a home for his punches in the this round.
He landed two good straight rights during this round. One of them snapped Belgaroui’s head back and reminded him he Pereira was not to be taken lightly. The other one, later in the round, was the beginning of the end of the fight.
Pereira backed Belgaroui up and then cracked him with a right cross which staggered him into the ropes next to one corner. It was a stunning blow, in the literal sense of the word, but even as Belgaroui reeled from it, Pereira was flowing into his follow-on combination.
A left hand to the liver found its home, followed by a high knee strike which came up with such sharpness and velocity that it tore through Belgaroui’s right eyebrow and opened a bone-deep cut which immediately began pouring blood.
It was a terrible cut; the referee called the doctor over and as soon as the doctor took one look at it he waved the fight off.
Alex Pereira def. Yousri Belgaroui by TKO (doctor stoppage). Round 3, 1:52