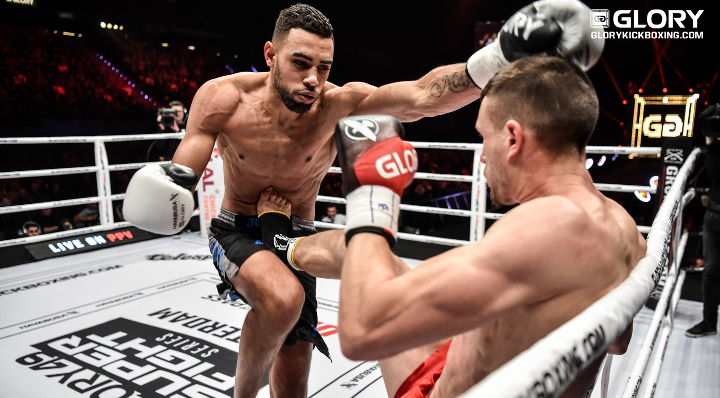 Danenberg and Bates impress - but for different reasons

Jamie Bates said he was coming into this fight with a point to prove. That he certainly did, albeit the point he made was not the point he had intended to make.
Bates beat Richard Abraham by decision at GLORY 40 earlier this year but said he wasn’t happy with his performance and hoped to score a more decisive victory at GLORY 49 against Eyevan Danenberg and thereby prove himself a potential contender.
Instead he proved that he is one of the toughest fighters in the Welterweight division, rising from no less than four separate knockdowns over the course of three rounds.
Every one of the knockdowns stemmed from the first one, which came in the very first round by way of a Danenberg knee to the midsection. The lanky Danenberg landed the razor-sharp knee with pinoint accuracy over Bates’ liver.
Bates looked to be in some amount of physical distress as he took the referee’s count but bravely regained his feet and got back into the fray. Danenberg had his target locked in though and soon landed another blow on it to score another knockdown.
The question became first whether Bates would make it to the end of the round and then, after he made it into the third round, whether he could make it to the end of the fight. Danenberg’s pressure was absolutely relentless and his long, rangy limbs give him numerous weapons to land with.
Those weapons were aimed squarely at Bates’ midsection for most of the fight and in retrospect it is amazing the Briton survived. The damage done by that first knockdown took everything out of him and his making it to the end of the fight was a display of sheer heart.
Danenberg looked exceptional in this performance, living up to the tips which were attached to his name when he first arrived in GLORY. He now rises to 3-1 in the organization and increasingly looks like a solid future prospect.
Eyevan Danenberg def. Jamie Bates, Unanimous Decision (30-24, 30-24, 30-24, 30-24, 30-24)