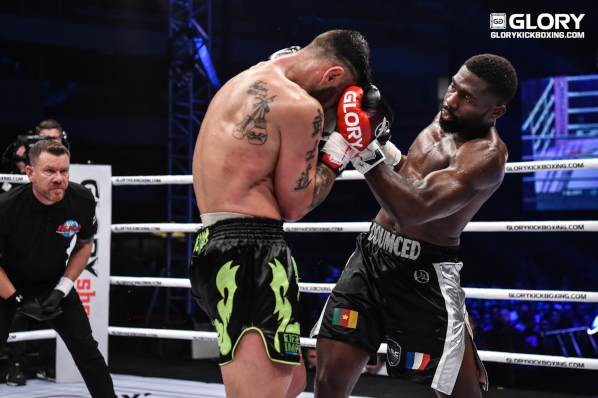 Many hands helped lay the road that took former Welterweight champion Cedric Doumbe from the outskirts of Cameroon’s capital city to the top of the kickboxing world, but none were more important than his mother and grandmother’s.

Doumbe was eight years old when his mother decided that she would go to France to look for work and hopefully be able to provide a better life for her children than Cameroon’s economy was allowing her to.

So he and his older sister went to live with her mother, their grandmother, while she went alone to France to try and find a situation for herself.

Things were not easy, but after a while she was able to get settled with work and a place to live.

It took a little longer to save enough money for plane tickets to bring her children to her, but eventually, one year after she first set off, Doumbe and his sister were able to travel to Paris and be reunited with their mother.

“I was 9, my sister was 12, and it was a culture shock of course. New school, new friends, everything new to us. In Cameroon we had a big house but in Paris we lived in a small apartment. It was troubling for us,” he recalls.

“My mother worked hard for us. She was always working. So after a year, my grandmother came over to join us in Paris as well. So we were all reunited. My grandmother would look after us after school when my mother was still working.”

No surprise then that Doumbe cites his mother and grandmother as his biggest role models.

“Our relationship is very close. My grandmother raised me in Cameroon and later in France we were also together all the time because my mother was working. She raised me since I was born and she is still doing it, giving me life advice.

“My mother is a role model because I saw she suffered a lot for us - and she still is. My big dream is to one day say to her ‘OK you can stop working now, your life now is vacation, you can do anything you want, I’ve got you’.

“I know she did everything for us. Everything a mother can do for her children. Every day I thank God for my mother and every day I pray that I win my fights and make the money that I can take care of her."

For Doumbe then, the world title is not just about recognition or making his nickname (“The Best”) ring true. It is more than that; it is, potentially, the key to a better life and the realization of a dream.

“The most important thing in life is not girls or money or food, it’s family. Everything I do is for my family today and for my future wife and children. That’s my motivation,” he says.
“Yes, [fighters] do it for the victory and the money but that’s all to get you to a place where you can provide for your family.”

Despite his love and affection for his mother, Doumbe found himself having to defy her wishes when it came to the subject of martial arts.
“I was very interested in fighting and training but she thought it was all just injuries and blood. She was like ‘No, I don’t want you to fight. No boxing for you, only work hard at school and then a good job.’

That made me sad, but I trained secretly. I said I was practicing soccer. She would call me - ‘Where are you?’ - and I would say I’m at soccer practice’ and that was OK.

“But then after a while, sometimes I would say I was at boxing. Over time she could see that I had no injuries and so she came to accept it and then I could stop pretending that I was at soccer practice!”

Doumbe’s mother couldn’t bring herself to watch his fights at first. The very first one she attended, she could not look at the ring while he was competing, only looking once the decision was being announced (Doumbe won).

But she was in attendance at GLORY 36 in Germany, where Doumbe took the world title from former champion Nieky Holzken in front of a packed-out King-Pilsner Arena.

“That was a big moment for me. She was very proud and I could see it in her eyes,” he recalls.

“That’s why the belt means everything to me and I am willing to do anything to get it back. And I know I will get it back. I’ve only lost a handful of times and never in a way where someone has destroyed me or really beaten me. It’s always been either I made mistakes or I got robbed.

So that’s why I am confident; I feel like God has big plans for me and I want my mother and grandmother to be proud of me. When I say I’m ‘The Best’, I mean it, and getting the belt back will prove it.”

Cedric Doumbe fights in the main event of GLORY 60 LYON this Saturday night in Lyon, France.