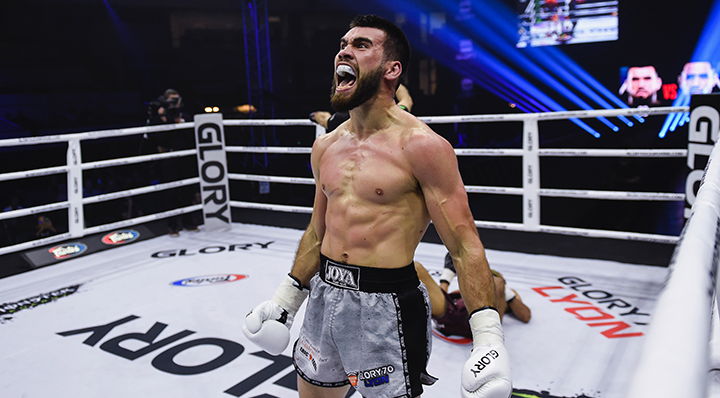 GLORY Kickboxing returned to Lyon, France on Saturday, Oct. 26 for its 70th event, touching down at the Palais des Sports de Gerland. The action kicked off with a three-fight preliminary card streaming live on YouTube and Facebook.

The preliminary card concluded with a Welterweight clash between Cédric Do (16-5, 9 KO’s) and Mehdi Kada (14-4, 5 KO’s), both of France. Kada landed first with a kick and was quickly answered by Do. Kada ripped power punches, landing to the body of Do.

The pair clinched and Do delivered a series of knees. Kada scored with an uppercut through the guard of Do to get some space. Do went back to the clinch and landed more knees.

Kada’s boxing prowess was on display late in the round as he used his footwork and head movement to land with combinations.

A shot late in the round from Do opened a cut under the right eye of Kada. Do was very aggressive to start round two, connecting with a huge knee and dropping Kada with a right hand.

Kada’s legs were wobbly and he was dropped again just moments later. The fight continued once more, but only for a moment, as Do was relentless, scoring a third and final knockdown to end the fight.

Angerville was undeterred and scored with a series of power punches. She wobbled Lobo along the ropes. A left kick to right straight combination from Angerville popped the head of Lobo. An overhand right from Angerville rocked Lobo late in the frame, but Lobo absorbed the shot.

The reach advantage of Angerville was apparent in round two as she was able to catch Lobo with counterpunches as the Portuguese fighter came forward. A right hand from Lobo found the jaw of Angerville along the ropes.

Angerville returned fire with a left hook of her own. Lobo tried to navigate the punches of Angerville by firing kicks in round three. The pair clinched and traded knees, but the referee warned both fighters for holding. Angerville landed a clean jab-cross combination, prompting a smile from Lobo. Lobo never stopped throwing, but it was Angerville who claimed victory on the scorecards.

A flying knee from Mermoux was met with a big shot from Ahamada, but the referee surprisingly ruled a slip. An overhand right from Ahamada landed once more and Mermoux went down. He survived the count, but Ahamada delivered more power shots until the round closed.

Mermoux clinched to begin round two and scored with knees. A straight right from Ahamada found the chin of Mermoux midway through the round. A follow-up uppercut sent Mermoux’s mouthpiece flying out of the ring.

A body kick by Mermoux slowed the advance of Ahamada late in the round. The final round featured both fighters throwing in the pocket. Ahamada connected with a front kick to the face of Mermoux, but he stayed upright.

Mermoux answered by clinching and landing short shots. It wasn’t enough however, as Ahamada took the decision win.