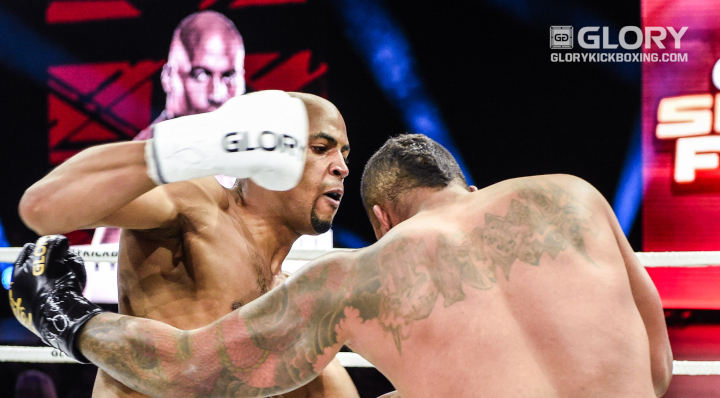 The GLORY 63 HOUSTON Heavyweight encounter between D’Angelo Marshall (18-4, 10 KO’s) and Demoreo Dennis (9-5) is guaranteed to provide fireworks - for as long as it lasts.
Marshall and Dennis are headlining Houston’s SuperFight Series card. Six of their combined nine GLORY appearances have ended inside the distance, suggesting that the ringside judges are unlikely to be needed for this February 1 clash.
Marshall, ranked #6 in the world, comes into the fight off the back of a GLORY 59 loss to the #1 ranked contender Jamal Ben Saddik. He’s looking to score a statement win which will lay the first stone in his own path to title contention.
Dennis, brother of GLORY light-Heavyweight Myron Dennis, is making his first appearance since GLORY 27, when he suffered a loss to Guto Inocente by way of the Brazilian’s patented spinning heel kick.
In the intervening period he’s been focused on MMA, but is now returning to the GLORY ring looking to take Marshall out and make a big jump up the rankings in the process.
Middleweights Matt Baker (22-6, 11 KO’s) and Ryot ‘The Game Changer’ Waller (2-0, 1 KO’s) are both coming off stoppage wins in their last GLORY appearances. By coincidence, both those stoppages were in the third round, making the final frame of this clash one to watch.
Baker comes out of Team Black in California and is coached by Dan Black, who has also coached the likes of Nick and Nate Diaz over the course of his career.
Waller comes out of Chicago’s notorious south side and says a “rough” upbringing led him into the fight game. His stoppage of Zack Wells at GLORY 56 was one of the most forceful in GLORY history.
British Featherweight Bailey Sugden (11-3, 2 KO’s) had a strong start in GLORY but hit some turbulence in 2018, suffering two losses and a No Contest. He wants a strong start to 2019.
Opposite him is New Zealand’s Quade Taranaki (6-6), who is still looking for his first win in GLORY after two outings. He is coming off a loss to Massaro Glunder at GLORY 56 and cannot settle for anything except victory in Houston.
In the center of the SuperFight Series card is hometown heroine Bekah Irwin. Just 18 years old, she is the youngest fighter ever to sign with GLORY.
Despite this, she is already highly experienced in international Muay Thai competition. A three-time winner of IFMA Youth gold medals (a highly-regarded honor), Irwin has competed more in Thailand than anywhere else in the world.
This is in fact her first fight in her home city. It’s a big occasion for her, but Invicta MMA veteran Stephanie Skinner is looking to spoil the party and silence the hometown crowd by taking a win over the talented youngster.
The SuperFight Series card is opened by Middleweight bangers Ivan ‘The Terrible’ Galaz (57-6, 15 KO’s) and Joe Taylor (2-1, 1 KO’s), followed by South African Lightweight Lorawn-t ‘Smash’ Nelson (7-0), 2-0 in GLORY, as he faces Chinese counterpart Wensheng Zhang (45-6,10 KO’s), who is 2-1 in GLORY. The winner edges into the division’s top ten.
GLORY 63 HOUSTON takes place Friday, February 1 at the Arena Theatre in Houston, Texas. Tickets are available here