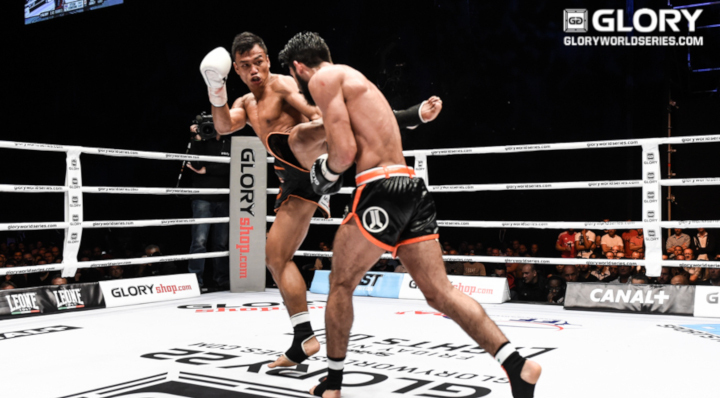 GLORY Lightweight champion Sitthichai Sitsongpeenong is known for having a quiet and humble personality, traits reflective of the Thai national character.
It’s comparatively rare for Thai fighters to engage in trash talk or make bold declarations of intent ahead of a fight. The American style of fight promotion is anathema to them.
So it was surprising when Sitthichai (121-30-5, 32 KO’s) told Thai reporters at a press conference in Bangkok last week that he intends to punish Josh Jauncey (29-8, 15 KO’s) in this Friday’s GLORY 61 NEW YORK title defense and then stop him inside the distance.
At the root of Sitthichai’s ire is an Instagram post on which Jauncey left a less-than-flattering comment about the Lightweight champion. It involved a “poop emoji” and a word which rhymes with the first half of Sitthichai’s name.
It was seen by a Thai fan, who shared it on Thai message boards. From there it came to the attention of Sitthichai and his team.
“A reporter brought it up at his departure press conference. Well, we all know Sitthichai is a nice boy, so his reply surprised people,” says Tim Dharmajiva, owner of the Sitsongpeenong camp.
“He spelled out what his intentions are and how he intends to resolve the insult. For me that doesn’t sound good for Josh. It’s so rare for Sitthichai to talk about his opponents in anything other than a respectful way.
“Usually he will only talk about his pride in defending his belt but here he was saying how he plans to end the fight and make a statement.”
This Friday’s fight will be the second time the two have met each other in the ring. Their first encounter came in the final of the GLORY 22 LILLE Lightweight Contender Tournament three years ago, with Sitthichai winning a unanimous decision after three rounds.
“Before that tournament we studied a lot of tape on Josh and on Davit Kiria and we concluded that Josh was by far the more dangerous fighter,” says Dharmajiva.
“Kiria was the former champion and people were looking at him as the threat. But our whole team was in agreement that in Jauncey we were looking at a very talented up-and-coming fighter with the potential to go all the way.
“By chance, after GLORY 22, our team and Jauncey’s were present at a few events in a row. So we got to know each other and I had some good talks with his dad. It didn’t take long to realize he’s a good guy and so are his two sons.
“I’ve been around Muay Thai for over thirty years, and in recent years been around kickboxing as well, so I’ve seen a lot of guys come and go. I offered some advice to the Jauncey’s based on my own experiences over the years.
“I said two things. First, his lack of fight experience. For me that was the biggest issue. He needed more fights and more competition frequency.
“Experience is essential: without experience, talent will only get you halfway. It’s not just about the actual ring experience, it’s about how it hardens you mentally and physically.
“Second - and meaning no disrespect to his team and trainers in Canada, or anyone else he has trained with in Europe - for me he needed to go and experience some good hard training at a top level camp in Thailand.
“That’s something he’s never done, I believe, and he would benefit greatly from it.
“Well, since that GLORY 22 fight, Josh has only had eight fights. Sitthichai has had 24 - he’s had three times as many fights as Josh in the intervening period, and he’s improved more in that time than what I think Josh has.
“Now if you look at that fight at GLORY 22, Josh was getting outclassed. There was a clear gap in skill and experience and if the fight had gone longer than three rounds, Sitthichai would have stopped him I think.
“And I feel like that’s because he didn’t have that hardness that comes with experience. These Thai fighters, you go shin on shin with them, they don’t even feel it. They are solid through and through from the sheer amount of training and fighting they do.
“So in my opinion Josh has done basically the opposite of what he should have done after that first fight with Sitthichai. By our standards he’s been borderline inactive.
“Now with this whole Instagram incident, Sitthichai and his trainers have been paying a lot more time than usual studying Josh. They’ve got him down to a tee, offensively and defensively.
“I think that’s going to show in this Friday’s fight. Sitthichai says he’s going to stop him and, for all the reasons I have just outlined, I think he will.”
GLORY 61 NEW YORK takes place this Friday, November 2 at the Manhattan Center Hammerstein Ballroom in Manhattan, New York.
The SuperFight Series card airs live on UFC Fight Pass from 7.30pm ET while the Main Card, which is Headlined by Sitthichai and Jauncey, airs live on ESPN3 at 9:30PM ET.