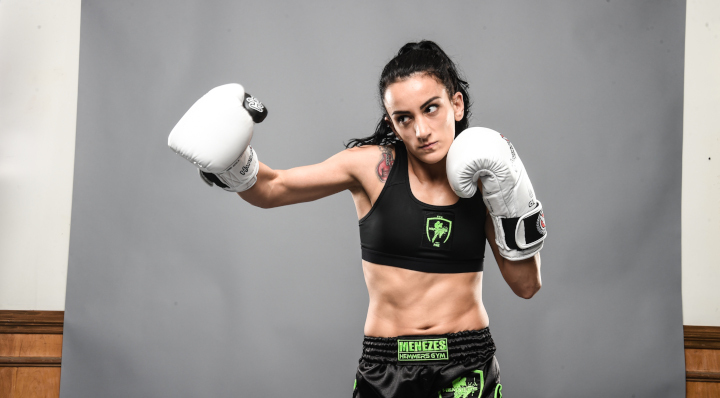 Menezes: Meksen “plays it safe” and “only goes for points”

Super-bantamweight title challenger Jady Menezes (12-2, 5 KO’s) feels “great” about this weekend’s upcoming rematch with defending champion Anissa Meksen.
The two fought at GLORY 43 NEW YORK last year, both making their GLORY debuts in the bout, with Meksen (96-3, 30 KO’s) coming away the winner by unanimous decision.
Meksen went on to capture the belt at GLORY 48 and since then has remained undefeated. Menezes has been absent from the ring since that GLORY 43 loss but is confident she can take Meksen this time.
“I deserve this fight because I was one of the best opponents for Anissa so far in GLORY,” she says.
“My advantage is my aggressiveness. I train very hard, only with men. It’s a tough day every day. I'm not afraid to get punched or kicked. Fighting against her is not a problem,”
“I feel great. I’ve waited a long time for this opportunity to compete for a title in the wold’s biggest organization. This fight will be very different [to our first].
“This title means everything. I've fought my whole life for it. This is part of my journey and all the difficulties I face every day to train and get it. It means a lot for Brazil too - I’m the only Brazilian woman in the organization. I’m ready for this.”
Meksen is undefeated in GLORY - in fact, riding a 34-fight win streak and undefeated since 2013 - yet Menezes believes she knows what the key to victory is.
“I love being the underdog. She has four or five world titles. In our first fight she should have knocked me out but failed. I just want to show the world that I'm a good fighter and I will change the history of this division,” the Brazilian says.
“Anissa’s weakness is that she always plays it safe: just tries to score a few points and win that way. I don’t know if she can really take a hard hit. She’s always the same: throw a few strikes, move, throw a few more, move again.
“I'll try for the knockout the whole time. I think she will start to get tired around the third round.”
GLORY 56 DENVER takes place tomorrow, Friday August 10, at the 1ST BANK CENTER in Denver, Colorado.
It airs LIVE on ESPN2 at 12 a.m. ET / 9 p.m. PT
Light-Heavyweight champion Artem Vakhitov Headlines the card, facing Danyo Ilunga in a world title clash. Meksen and Menezes form the co-main.