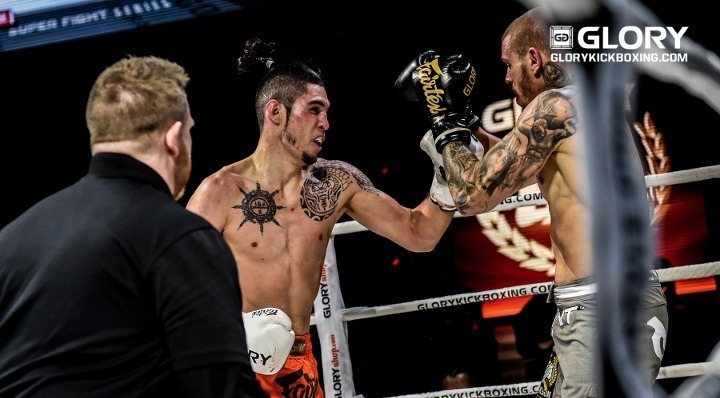 Omar Moreno took a decision win over Casey Greene in their Welterweight battle, but it was not without controversy.

The two went to to an extra round after their scheduled three rounds ended in a scoreline of 27-27. But Greene could be forgiven for feeling like he had been robbed of victory by that scoreline, which stemmed from a dubious knockdown call late in the third round.

The first knockdown of the fight had been scored by Greene in the WHAT ROUND and had him ahead on the scorecards as they went into the third round. But Moreno’s diligent offense finally paid off when he scored a third-round knockdown of his own.

No controversy attached to that one: it started with a beautiful-placed knee to Greene’s jaw and was completed by a follow-on set of punches which resulted in the referee stepping in to administer a count.

On the restart, Moreno exploded towards Greene with a push-kick to the face. Greene staggered backwards and fell over, but it seemed to be a case of over-balancing rather than suffering any detriment from the blow itself.

The referee saw different however and administered a second eight-count to a strongly protesting Greene. The call made the round a 10-7 in Moreno’s favor and meant that a decision victory had been snatched from Greene, who had looked set to win a decision.

When the fight was announced as a draw the crowd reacted with boos. But that quickly changed to cheering once it was announced that the fight would now be going one more round. Crowd support was now palpably behind Greene, but he seemed deflated. Moreno controlled the extra round, with Greene rallying far too late to make an effective difference.

Having won the extra round, Moreno had won the fight, to Greene’s immense chagrin. Moreno, an unknown when he appeared on the GLORY REDEMPTION card in December to take a win over Anyin Wang, is now 2-0 in the Welterweight division.

Greene hadn’t been in the GLORY ring since his GLORY 34 DENVER knockout loss to Thongchai Sitsongpeenong in October 2016.

After more than a year away from the ring, he was looking to come back in a big way and in the process snap his two-fight losing streak in the organization. That much-needed win was almost in his grasp. instead, a debatable referee call extends his losing run to three fights.