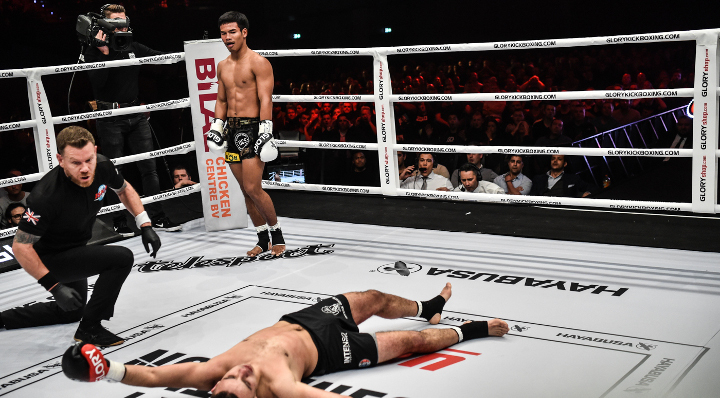 Petchpanomrung’s left kick was already established as a dangerous weapon well before GLORY REDEMPTION. He pulverized Stansliv Renita’s right side with in his debut and he did the same to Robin van Roosmalen in their narrow title fight at GLORY 41 earlier this year.
At REDEMPTION he faced Zakaria Zougarry, like Petchpanomrung a rising star of the Featherweight division. Their fight was billed as a contender elimination fight which would see the winner move forward to a title shot in 2018.
Zougarry had gone 2-0 in GLORY before this fight and in the process revealed himself to be one of the trickier, more creative fighters in this weight class. But of course trickery comes as standard to Thai fighters who have been training their whole lives, and so Petchpanomrung wasn’t going to be easily bamboozled.
If you’re a fighter who likes to employ feints and misdirection to force your opponent into making mistakes and opening up, the best kind of opponent you can have is one who just marches forward relentlessly. That linear forward pressure really lets the crafty counter-fighter thrive.
But in this fight, neither fighter was the kind to just march forward hoping pressure and power would win the fight. They were both alive to each other’s tricks, which made finding clean openings a lot harder.
The duel played out into the third round. Petchpanomrung was scoring well with kicks and forcing Zougarry to do a lot of clinching, but no decisive shots were being landed. That all changed in the middle of the third round though, when Zougarry fell into Petchpanomrung’s trap at last.
Petchpanomrung had been hammering the left body kick home all through the fight, as is his style. It was only in the third round that he felt he had done enough damage to have Zougarry wary of it and wincing in anticipation of it coming in.
A couple more body kicks established the target, then another body kick instead suddenly sailed upstairs and caught Zougarry in the side of his head, completely undefended.
He had made the mistake of being overly responsive to what he thought was an incoming body kick and thereby left himself exposed. The price was heavy: he fell to the canvas unconscious and remained that way for some time, oblivious to Petchpanomrung’s wild celebrations.
Petchpanomrung returns to Thailand with a big win in the bag and a probable nomination for Knockout of the Year. More importantly, he’s back in the title shot frame. Zougarry, fighting in his own city of Rotterdam, had a shorter journey home but finds that his road to title contention just got a little longer.