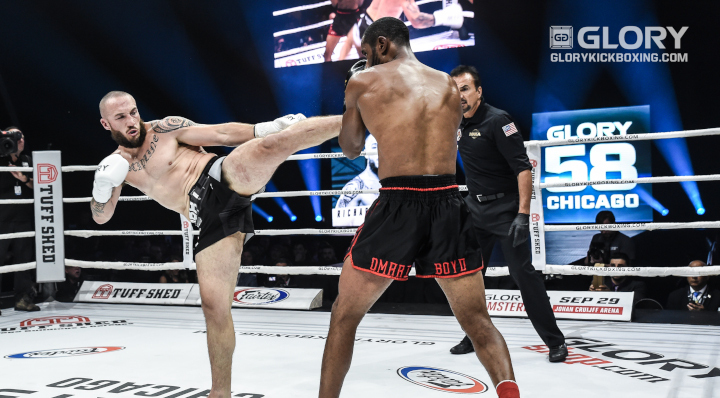 For the last two weeks, Chicago Welterweight Richard ‘Maximus’ Abraham (13-7, 4 KO’s) has been sleeping in a single bed in an empty house on a quiet street in the southern Netherlands city of Breda.
The rowhouse - owned by Hemmers Gym - has its own place in kickboxing history, having at times over the last two decades variously hosted Ramon Dekkers, Stefan Leko, Heath Herring, Sergei Kharitonov and many more household names of the fight-sport world.
Sometimes the house’s six single beds are full, as when whole teams visit for seminars, but at present the only occupant is Abraham.
The conditions are a far cry from his home in the sprawling Chicago suburbs, where the six children he shares with his wife Kelly ensure that there is never a quiet or dull moment.
“It’s definitely different here. Back home I know so many people, here I don’t know anyone. I’m used to talking to people all day at home, in the gym or at work or whatever. Here I don’t have too many people to talk to. It’s a little unusual,” he says.
“And then just figuring out day to day living is also different, so that’s been interesting. But it’s been good, I’m enjoying it. It’s been hard being away from the family, but it’s allowed me to really refocus. It’s been like being a beginner again, in a way.”
‘Refocusing’ is a topic prominent in Abraham’s mind at present.
He had “a very hard” 2018, much of that due to opening his own gym. The hours involved in maintaining his day job, training for fights, being a family man and fitting out then running his gym took their toll.
Now that the gym is up and running, some of the pressure has abated. But he still wanted to get some different looks in his training and so he headed to the Netherlands to train at Hemmers Gym, home of Welterweight champion Harut Grigorian and Heavyweight contender Jamal Ben Saddik.
“I knew they sparred hard out here, but just how hard they go was a bit of a surprise,” he laughs. “These guys go HARD in their sparring. It’s really intense. They are just in your face the whole time.
“They aren’t too big on footwork or movement as such, they are just in front of you the whole time. And I am one of the smallest guys in the gym here as well; everyone out here in the Netherlands is huge it feels like!
“Being out here has really allowed me to refocus and has reignited the passion that I have for this sport.”
Experiencing some size difference is actually good preparation for his upcoming fight with Charles Rodriguez at GLORY 63 HOUSTON on February 1.
Rodriguez stands 6’0 (Abraham is 5’8”) and brings a record of 9-0, 4 KO’s into the ring with him, three of those wins being in GLORY. Those numbers don’t faze the experienced Abraham though.
“He’s a big guy, he cuts a lot of weight I believe. I heard he cuts as much as 20-25 pounds. So he has some size advantage in there when he fights, he is usually the bigger guy, but I feel like that maybe allows him to cover up for some other shortcomings he has,” says ‘Maximus’.
“And yeah, he’s got an undefeated record, but a lot of that was before he arrived in GLORY. I’m not reading a whole lot into that.”
GLORY 63 HOUSTON takes place at the Arena Theatre in downtown Houston, Texas on Friday, February 1. Featherweight champion Petchpanomrung is in the Headline slot as he defends against former champion Serhiy Adamchuk.