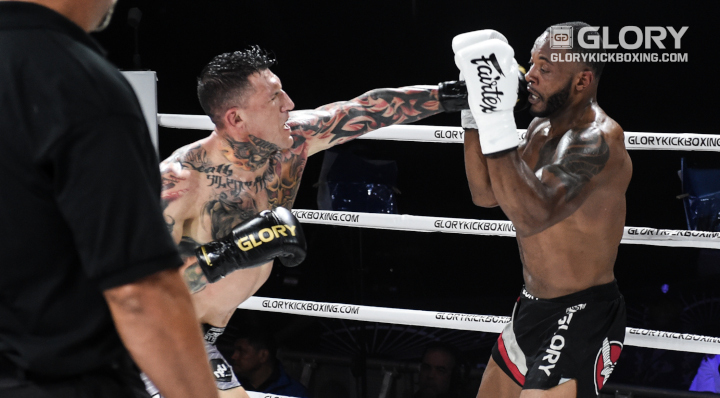 Joe ‘Son of a Legend’ Taylor (5-1, 3 KO) had a fairytale debut when he fought at GLORY 43 NEW YORK last year and secured victory in the same venue his own father had boxed in several decades earlier.
He returned to The Theater at Madison Square Garden for GLORY 55 NEW YORK, his sophomore outing in the organization, but this time without the fairytale ending.
He and Jacob Rodriguez (2-2, 2 KO’s) opened the SuperFight Series broadcast, Rodriguez making his GLORY debut in the bout.
Taylor came out fighting on the outside and being patient. Rodriguez walked forward and cut off the ring with low kicks. Taylor answered with kicks of his own to the lead leg of Rodriguez. Taylor scored with his jab and ended the round with a heavy Superman punch.
Rodriguez continued his advance in round two, despite the bruising on his left thigh. The two power-punchers exchanged punches in the center of the ring, but Taylor was able to counter with knees to the body.
Taylor frequently fought off the back foot as Rodriguez peppered him with low kicks. Taylor was more aggressive to open the third round, scoring with a spinning back fist but Rodriguez powered through it, forcing Taylor against the ropes with regularity.
The pair traded heavy shots throughout, including an uppercut from Taylor that Rodriguez brushed off. Fatigue set in during the final minute as both men battled to the final bell.
The hard-fought bout went to the judges, with Rodriguez earning the victory and denying Taylor that second consecutive win in a venue which means so much to him.
Jacob Rodriguez def. Joe Taylor by unanimous decision (30-27, 29-28, 29-28)