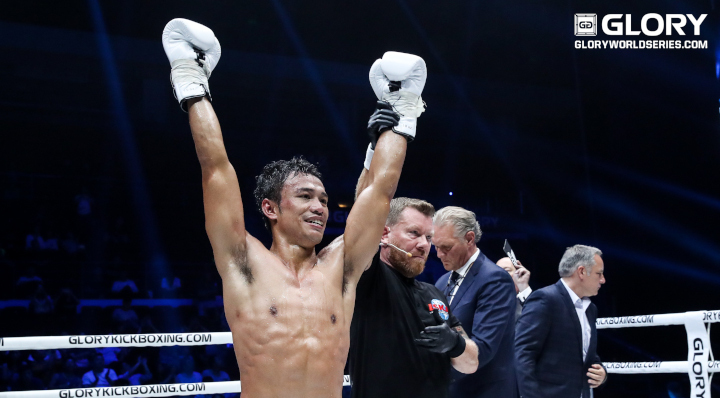 The GLORY 57 main event featured the fourth meeting between Lightweight champion Sitthichai Sitsongpeenong (120-30-5, 32 KO’s) and Marat Grigorian (59-10-1 (1 NC), 35 KO’s). In the pair’s previous three meetings, it was the Thai Sitthichai who bested the Armenian Grigorian on the scorecards, including their most recent meeting, a title clash at GLORY 36 in Germany.

Grigorian threw a variety of strikes in the opening moments of the fight. He looked to confuse the champion with a switch head kick and a heavy right hand. Sitthichai calmly avoided the strikes and delivered his patented left kick to the body. The lead hook of Sitthichai allowed him to slow the advance of Grigorian. A superman punch attempt from Grigorian just missed late in the round, opening the door for Sitthichai to connect with a knee to the midsection.

The aggression of Grigorian was repeated early in round two. Sitthichai countered with his left kick once more to slow the advance of the challenger. The left knee from Sitthichai scored and was followed by a head kick. Grigorian fired a flying knee, drawing a smile from the champion as he stepped out of the way. The boxing of the champion started to land, as he delivered a straight left hand. Grigorian went back to the superman punch in the final seconds of the round, partially connecting on the champion.

A left straight from Sitthichai was the first strike to land in round three. The forward advance of Grigorian led to a heavy exchange in the center of the ring and both fighters were able to land. The power of Grigorian was evident midway through the frame, as he delivered a heavy right hand to the jaw of the champion. Sitthichai turned to his kicking attack as the round progressed, wowing the Shenzhen crowd with a head kick attempt.

A brief clinch opened the championship rounds. Sitthichai’s knees and kicks landed early in the round, but he transitioned back to his boxing. Grigorian continued to spam superman punches to the close the distance and avoid the kicks of the champion. The pace of Grigorian slowed, but he remained effective with his power punches and outside low kicks.

Both fighters came forward in the final frame. The boxing exchanges were an equal mix of volume from Sitthichai and power from Grigorian. A straight left from Sitthichai snapped the head of Grigorian, but the challenger never stopped coming forward. A small cut bled over the right eye of the champion in the waning moments as the fight went the distance.

The judges were split, but the champion took the fight on four of the scorecards.

“I was probably a little bit smarter in my defense. Marat was in great shape tonight,” said Sitthichai after the hard-fought bout.

Asked who he’d like to face next, the champion paid further respect to his challenger, “It doesn’t matter who is next because Marat is the next best fighter in the world. I’ll fight anyone.”