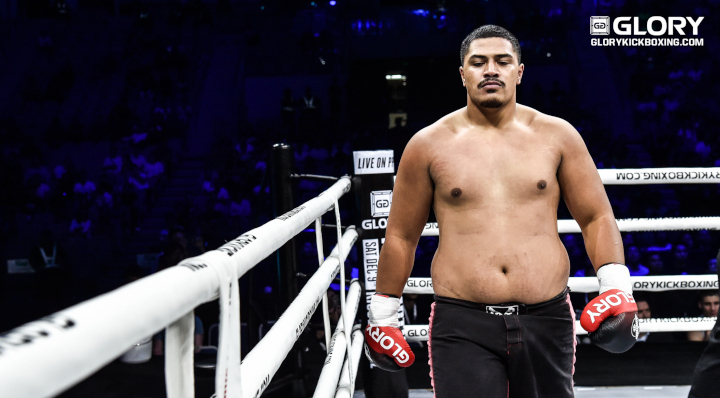 Tafa: “I’ll catch him in the first round, then it’s done”

The simmering beef between Heavyweights Junior Tafa (18-3, 14 KO’s) and Anthony ‘The Joker’ McDonald (8-2, 6 KO’s) will explode when they square off at GLORY 55 NEW YORK later this month.
McDonald and Tafa have been engaging in a war of words via social media for months. Last week McDonald told GLORYKickboxing.com that he is going to “expose” Tafa on July 20.
‘The Joker’ said that Tafa “does not belong in the top ten” and that the Samoan-Australian is “barely training… when you look on social media he’s drinking, he’s eating anything he wants.”
Tafa read McDonald’s comments over the weekend and cannot understand how McDonald feels qualified to cast aspersions on his training regimen.
“I’ve seen videos of him training! Have you seen them? He trains at like weight-lifting gyms or something. Puts his gloves on and trains at regular fitness places! It’s embarrassing bro.”
Asked how he would rate McDonald as a threat, relative to other fighters he has faced, Tafa deadpans.
“I don’t. I don’t rate him at all.”
McDonald has also cast doubts on Tafa’s vaunted punching power, saying Tafa had an “easy” opponent for his GLORY debut but could do “nothing” to Guto Inocente and Benjamin Adegbuyi when he faced them in the GLORY 50 CHICAGO Heavyweight tournament.
McDonald also said that his gameplan will be “constant movement” that will leave Tafa “swinging at thin air”.
These comments have Tafa shaking his head.
“He’s a comedian, it’s in his name, I guess they call him ‘The Joker’ for a reason,” he says.
“Look, I will catch him in round one and then he’s moving nowhere. There will be no more movement.
“I’m not chasing him round the ring. I will take my time, wait for the right moment and then it’s done.”
Speaking of Adegbuyi, Tafa considers himself to have unfinished business with the Romanian and is gunning for a rematch as soon as possible.
“When I win this fight I am calling Adegbuyi out. He’s the only guy that’s ever put me down in a fight and I want the rematch,” he says.
GLORY 55 SuperFight Series will stream live and exclusively on UFC FIGHT PASS at 7 p.m. ET / 4 p.m. PT on Friday, July 20.
Tickets for GLORY 55 New York and GLORY 55 SuperFight Series are on sale now and available for purchase at ticketmaster.com or the Madison Square Garden box office.