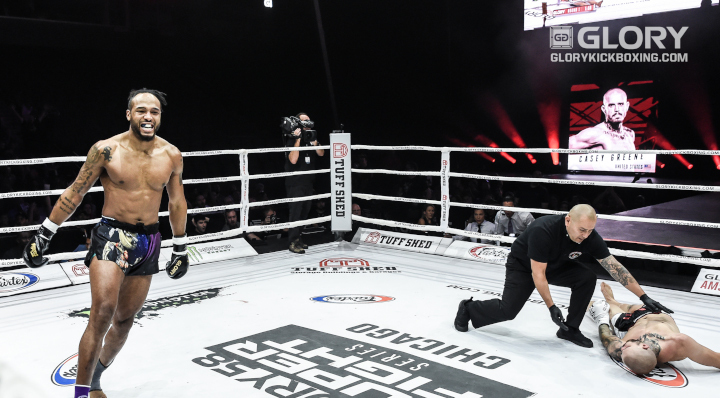 Minnesota Martial Arts Academy’s Troy ‘Trouble’ Jones (11-1, 10 KO’s) was actually born in Chicago, only leaving the city at the age of 12 when his family relocated to his current home city.
The former college football player reps both cities though, rooting for the Chicago Bears in the NFL and for various Minnesota college teams in his home area.
Football is a regular fixture on ESPN Sportscenter, the leading sports highlight show in North America, but kickboxers are a rarer feature. Marat Grigorian managed it two years ago and in September last year Jones became the second GLORY kickboxer to make the evening highlights.
“Honestly, that knockout that got me on Sportscenter, I’ve been knocking people out like that my whole career. That’s just the one that really got noticed,” says GLORY Welterweight Troy Jones of his head-kick KO of Casey Greene at GLORY 58 CHICAGO.
The finish was ESPN Sportscenter’s #1 play of the day, beating out other submissions from the NFL and NBA.
“I feel like that made people more aware of what I can do and how dangerous I am. I have KO’d guys with every weapon - kicks, knees, punches, everything. That moment just elevated my profile in the USA,” he says.
“It elevated GLORY too. Getting on Sportscenter is like the highest level sports exposure you can get in the US. I was #1 that night and that had people looking at what GLORY is and what it’s all about. And I am hoping to get another one in this upcoming fight.”The ‘upcoming fight’ is versus Omari Boyd (13-1, 1 KO) at GLORY 63 HOUSTON. It pits two of America’s top Welterweights against each other: Boyd is undefeated in GLORY, with a 5-0 record in the organization.
“I always said that I wanted want to prove myself the best in my weight class in the US and then move on to fighting the Europeans on the arena cards in Amsterdam. That’s what I want a win here to do for me,” says Jones.
“I think it’s a good fight. He’s a game opponent but I feel I am technically better than him, plus I am faster and stronger. I have more power also - he’s only got one knockout on his record, I have 10. His cardio and pressure are good, he sets a high pace, I’d say that’s his best asset.
“My key to victory is to hit him hard. Again and again. That’s my gameplan in every fight!”
GLORY 63 HOUSTON takes place Friday, February 1 at the Arena Theater in downtown Houston, Texas. The card features Featherweight champion Petchpanomrung and local phenom Bekah Irwin, who at just 18 years is the youngest fighter ever to sign with GLORY Kickboxing.