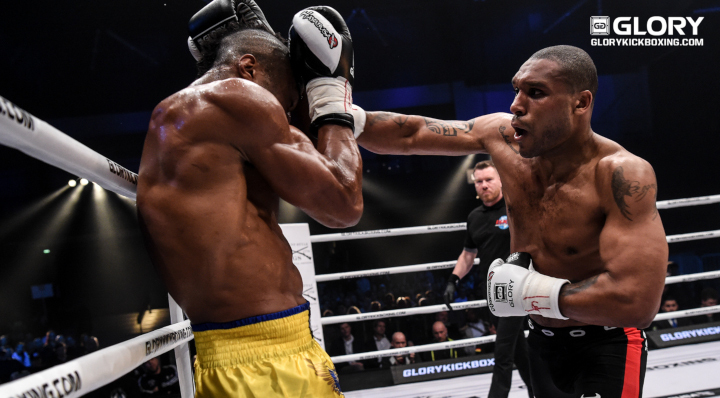 Former Middleweight champion Jason ‘Psycho’ Wilnis heads to Houston, Texas next month for a showdown with hometown hero Jacob ‘OneTime’ Rodriguez on the GLORY 63 HOUSTON Main Card.
Wilnis retained the title against Israel Adesanya at GLORY 37 but then lost it to former champion Simon Marcus at GLORY 40. That loss was followed by two more, putting him on a three-fight losing streak as he heads into his first fight of 2019.
Thus, despite their wide gulf in experience, Rodriguez said last week that he feels confident about taking the former champion on and defending home soil in the process.
“It’s good that he talks like that and prepares himself like that, but it’s not like that. I am still young, I am 28 and I am still here,” says Wilnis.
“I am one of the strongest in this league so if he thinks he is going to beat me easily… no, that’s not going to happen. I am going to all-in, bring everything.
“2018 was not my year. I had a bad injury and then I missed out on two fights through cancellation and I lost my only fight of the year earlier the year.
“In 2019 we can start all over again. I feel great now, I have been training with great people around the world, the injury is all gone. I know what I am and what I can do.
“I am not arrogant or cocky but I am one of the best in this weight class and I need to prove that this year.
What this year looks like for Wilnis remains to be seen, but if it brings with it rematches against perennial rivals Yousri Belgaroui and Simon Marcus, so be it.
“Those guys are always going to be in my path because they are so close to me in the rankings. We all want the belt, so if we need to cross paths again then we will,” he says.
As for Rodriguez, “he looks like a strong guy. He’s from Houston as well so that’s going to give him some energy. We don’t know much about him but for me it’s just work. He’s in my way and I have to take him out.”
GLORY 63 HOUSTON takes place Friday, February 1 at the Arena Theater in Houston, Texas.