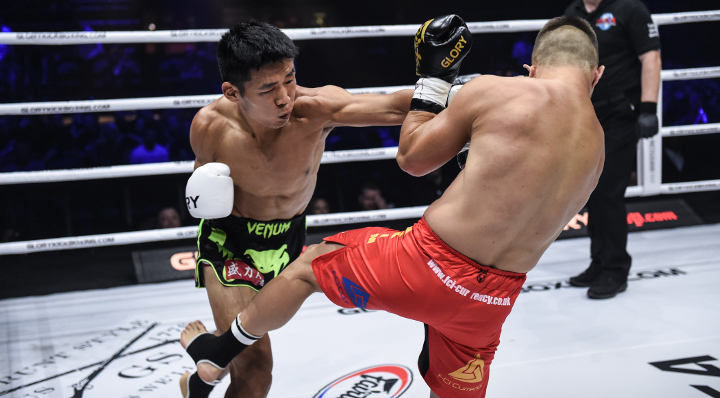 The GLORY 54 Main Card in Birmingham opened with a Featherweight match-up between Romanian Adrian Maxim (33-9, 17 KO) and 20-year-old Chinese fighter Chenglong Zhang (45-7, 11 KO), who looked to build on his GLORY 46 tournament victory back in October.

Zhang fired a body kick at the opening bell and Maxim responded with a right hand that surprised Zhang.

Maxim used the clinch to deliver some body shots, but absorbed a pair of heavy kicks from Zhang when they separated. Maxim begged Zhang to come forward, which he obliged with more kicks as the round closed.

Maxim came forward to open the second frame, but that made him an easy target for the low kicks of Zhang.

He repeatedly attacked the back leg of the Romanian fighter. Zhang’s jab became more prominent as the round progressed, setting up knees to the body.

There was a sense of urgency from Maxim in round three, as he was down on the scorecards. Zhang countered with a big knee to the rib cage.

Maxim’s right hand was thrown with regularity, but Zhang was able to avoid any damage. The step-in knee of Zhang was a weapon late, but he could not put away Maxim.

Zhang landed a blow as the round expired and dropped Maxim, but it was ruled a late knockdown by the referee.

All five judges scored the bout in favor of Zhang, who will now look to ride his now-considerable momentum into a fight in his hometown of Shenzhen later this summer.