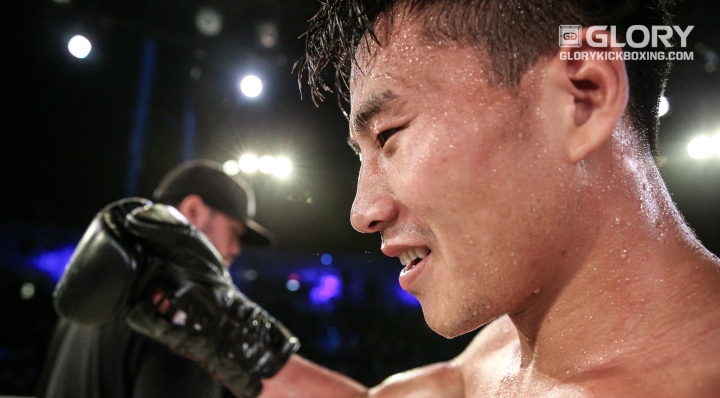 Nelson’s size advantage was evident from the staredown. He opened with a combination and pressured Zhang against the ropes. Zhang showed good footwork to angle away from the longer Nelson.

Nelson caught Zhang with a right hand and followed with a head kick that Zhang narrowly avoided. Zhang landed a big knee to the body of Nelson, who temporarily froze in his tracks. Nelson recovered and fired a knee of his own. Zhang finished the round with a crisp left hand.

The speed of Zhang continued to cause problems for Nelson. He landed a straight right hand that sent Nelson to the mat and earned a count from the referee.

Nelson opted to clinch and land knees. He looked for a flying knee, but Zhang timed it and landed a heavy left hand. Nelson’s output slowed late in round two.

Nelson landed a right straight to open round three. The referee warned both men for clinching shortly thereafter.

Sensing Zhang was hurt, Nelson turned up his offense. A big uppercut hurt Zhang and Nelson went for broke. He unleashed a series of punches and knees along the ropes, but Zhang somehow weathered the onslaught.

When the judges’ scores were announced, one judge gave the three-round war to Nelson, but the other two judges dissented, handing Zhang the split decision nod.