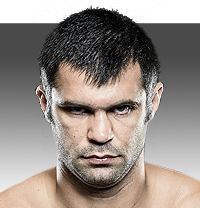 You know a fighter is exciting when even his fellow fighters will stop what they are doing in order to watch him in action. Daniel Ghita is one of those few competitors on the kickboxing circuit today who draws even his rivals to ringside to watch what he does.

A former bodyguard to the president of Romania, Ghita is a very dangerous package; he combines speed, power, precision and tactical thinking as he dismantles one opponent after another. Since he broke onto the world circuit in 2009, kickboxing fans have been watching his progress with interest and over the past year Ghita entered into his prime as a fighter.

He has made quick work of every opponent put in front of him of late, even though often he would find the opponent being changed on short notice because of pull-outs. Rumour has it that as fight night has approached, more than one fighter has flatly refused to face Ghita for fear of a crushing KO loss and a lot of punishment along the way.

That’s because Ghita likes to break his opponents down. He utilises the leg-kick a lot and he also likes to smash his left leg into the opponent’s body, taking away their energy and sapping their will to continue the fight. The power of his hands is without question as well - his left hook is particularly hard and he likes to counter-attack with it, punishing any lapse in his opponent’s guard or concentration.

Now in the ranks of the GLORY heavyweight division, Ghita is finally among the best of the best. His participation in GLORY will be his first chance to win a major tournament in kickboxing and he has talked of retiring once he achieves this dream, despite being just 31 years old and in his absolute prime. So do not miss a moment of Ghita’s action in the GLORY ring - you may be witnessing a legend in the making.