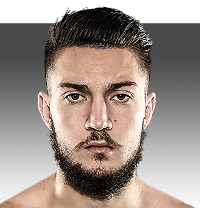 The young British welterweight Chad Sugden comes from a fighting family. His father Dean was a kickboxing champion in his competition years and his younger brothers Regis and Bailey are also fighters, in MMA and kickboxing respectively.

“Every male member of my family has something to do with fighting,” laughs Sugded, who started his kickboxing training at the age of five. He had success as an amateur kickboxer and traveled the world to compete before making the move up into the professional ranks.

Sugden has also trained extensively as an amateur boxer and he feels this gives his kickboxing game an added edge. “Make them miss, then make them pay,” is his adage. He says he is “hard to hit”; he likes to use head movement and footwork to make opponents’ blows go wide of the mark, leaving them in an exposed position for the counter-attack. This is where his nickname ‘2Slick’ comes from.

In 2013 Sugden was voted the ISKA Fighter of the Year, a prestigious award for a fighter who was not long past his 20th birthday. The award was personally presented to him by the heavyweight icon Peter Aerts.

Sugden was born and raised in Nottingham, England, a city which has produced other notable fighters such as Paul ‘Semtex’ Daley and Dan ‘The Outlaw’ Hardy, professional MMA fighters known for their striking. Sugden regularly trains with both.