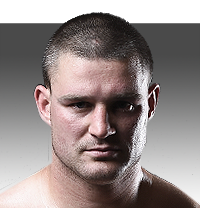 Igor Jurkovic comes from Croatia and as a youngster he idolized Mirko ‘CroCop’ Filipovic, the legendary heavyweight who carried the Croatian flag around the world. Jurkovic says that he wanted to be a kickboxer ever since he first saw ‘CroCop’ fights on Croatian television.

Initially he competed as a heavyweight, that being the money division at the time. But GLORY made light-heavyweight into a flagship division and Jurkovic felt that suited his frame better. He made his debut at 205lbs in March with a knockout of the experienced and high-ranked Michael Duut.

Jurkovic looks able to make an impact at light-heavyweight. He still has power, as we saw with the KO of Duut, but he has gained speed and no longer suffers a size disadvantage against his opponents. 2014 could be his breakout year.