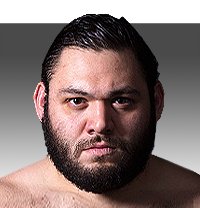 Dutch-Moroccan heavyweight Lazaar started training at the age of “15 or 16” and had his first fight at the age of 19, whereupon it became very apparent that he is packing a crazy amount of power in his punches.

Since then he has blasted his way up the Dutch rankings and now owns the heavyweight championship in ENFUSION, the top domestic league in the Netherlands.

Lazaar is not the most stereotypical kickboxer in appearance – his tubby frame makes it look like he spends more time on the couch than in the gym. But looks can be deceiving – he is a very dynamic fighter and it is not unusual to see him deploy a flying knee from nowhere.

Punches are Lazaar's real stock in trade though. He throws BOMBS – they land and people fall over and stay down. “I don't fight people, I knock them out. I come to fight, not to play for points, I want the knock out!” he laughs.