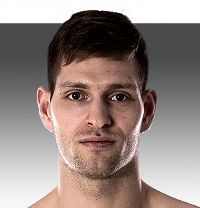 Kornilov is a young prospect and obviously doesn't have a huge amount of professional experience. But in the fights he has had thus far, he has shown promise. In particular he has demonstrated a thunderous right hand which he also knows how to set up.

At 6'5” he is a tall fighter, but he is also very mobile, which is unusual in fighters this size. He moves well and has good head movement, which he uses to slip opponent's attacks and then set up his counter-attack.

He also enters exchanges from a variety of angles/set-ups, keeping the opponent guessing. He is young in years and career, but he is not one dimensional.

He is from St. Petersburg, on the European seaboard of Russia.