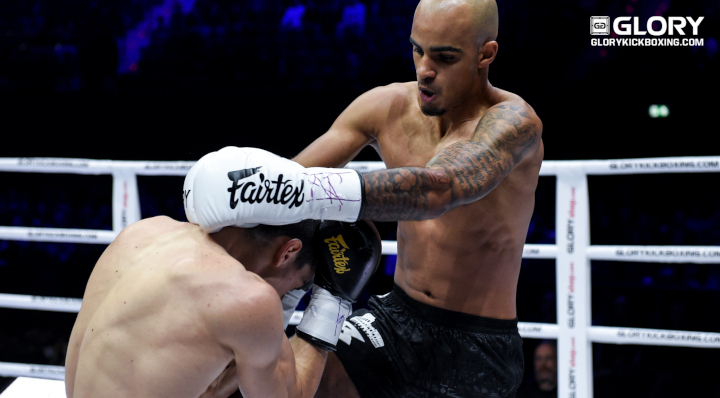 The pair met previously in the final of a Lightweight Contender Tournament at GLORY 49, with the Bulgarian Koprivlenski edging Morocco’s Beztati on the scorecards in the tournament final.

It was all kicks from the familiar foes in the fight’s opening minute. Beztati scored with a heavy shot along the ropes, but Koprivlenski was able to stay on his feet.

The taller Beztati was aggressive, initiating the clinch and landing knees. Koprivlenski looked to land a spinning backfist — a technique that earned him a knockdown in the pair’s first fight — but Beztati was able to evade. Koprivlenski came forward with combinations, but absorbed an uppercut on the inside from the 21-year-old Beztati.

Beztati fired a wheel kick to open the second stanza, but Koprivlenski stepped out of range. The pair clinched and Beztati cracked Koprivlenski with a heavy punch as the pair separated. The kicks of Koprivlenski were consistent, but they did not affect the offense of Beztati.

Koprivlenski again looked for a spinning backfist, just glancing it off the glove of Beztati. A head kick from Beztati found its mark late in the round, but Koprivlenski wore it well.

The boxing of Beztati was the story early in the final frame. The Moroccan ripped the body of Koprivlenski with punches.

The pace of the Bulgarian slowed, as he struggled to get inside the range of the taller fighter. A big body kick from Beztati produced a groan from Koprivlenski in the waning seconds of the fight.

After three rounds, the judges rewarded the efforts of Beztati, allowing him to avenge his previous loss.

“The difference tonight was that I wasn’t injured. We were both 100 percent,” said Beztati. “I had a good performance. Stoyan is a good fighter. It take two good fighters to have a good fight.

“I want a title shot. It’ll be a different fight than last time.”