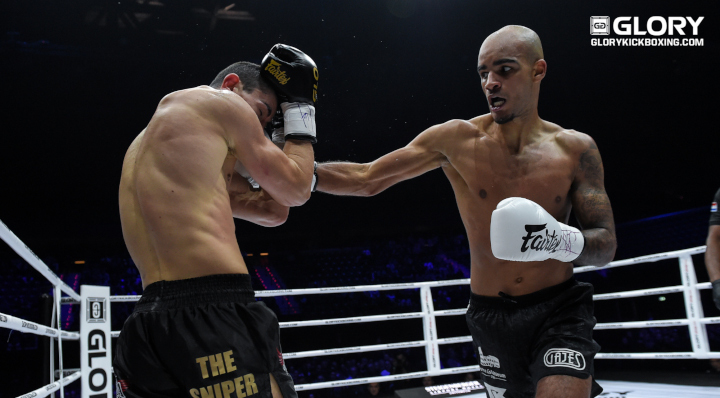 As rising stars of the Lightweight division, a clash between Tyjani Beztati and Josh Jauncey was always inevitable.
Both have impressed fans in their GLORY runs to date and both of them had title shots in 2018, losing decisions to dominant Thai champion Sitthichai but giving good accounts of themselves in the process.
It has always been a question of ‘when’ the two would meet rather than ‘if’. That day is now set: GLORY 65 UTRECHT on Friday, May 17 at the Central Studios building in Utrecht, Netherlands.
Beztati (18-3, 6 KO’s) and Jauncey (29-9, 15 KO’s) both have eight wins in GLORY, but Beztati sees his 8-2 record in the organization as carrying more weight than Jauncey’s 8-6 scoreline.
“He’s good, he’s got some good wins, fought some good names. He’s got some nice moves and some sneaky tricks but I can adapt to all that,” he says.
“Right now I am the best version of myself that I have ever been and when I look at me and Josh Jauncey, I am the better man. I have more skills than him.”
Sitthichai is defending his belt against Marat Grigorian in the co-main event of GLORY 65 UTRECHT and Beztati is eager to take a shot at whoever comes away with the title after that fight.
“This is a must-win fight for me. It’s a fight I have to win, because then it puts me in line for another shot at the title. That’s what I want. If I win this fight then I deserve a title shot, it’s as simple as that. That’s what is on my mind every day and that’s what people want to see,” he says.
“I respect Josh Jauncey as a fighter and he’s very good, but a win over him doesn’t mean a lot to me just in and of itself, if you know what I mean? The important thing for me here is not ‘get a win over Josh Jauncey’ but ‘get a win that gets you the title shot’.”
Beztati’s shot at Sitthichai’s belt came almost exactly a year before GLORY 65. He faced the champion in May 2018 after taking the fight on short notice and gave Sitthichai more problems than most fans had anticipated.
“That was a great experience for me and even though I did not get the win, it raised my game and my confidence a lot. I am certain that I am ready for the rematch now. It’s what is on my mind every day, nothing else. It’s what I train for every day, twice a day,” he says.
“I also only had four weeks notice, originally I was set to fight at a GLORY event in New York when the opportunity to fight Sitthichai came up. A month before the fight I had been on holiday, partying on the beach! So I think a full training camp would also be interesting and would add something for me.
“What would be different in a rematch with Sitthichai is that I would show him less respect in the ring. He’s a great champion and a great ambassador for our sport but I showed him too much respect when we fought. I wouldn’t make that mistake a second time.”
GLORY 65 UTRECHT takes place Friday, May 17 at the Central Studios in Utrecht, Netherlands and features two world title fights: Alex Pereira defends the Middleweight title against Jason Wilnis and Sitthichai defends the Lightweight title against Marat Grigorian.
The unique Central Studios venue means tickets are in extremely limited supply and are selling out fast. Click here to check availability and buy tickets.