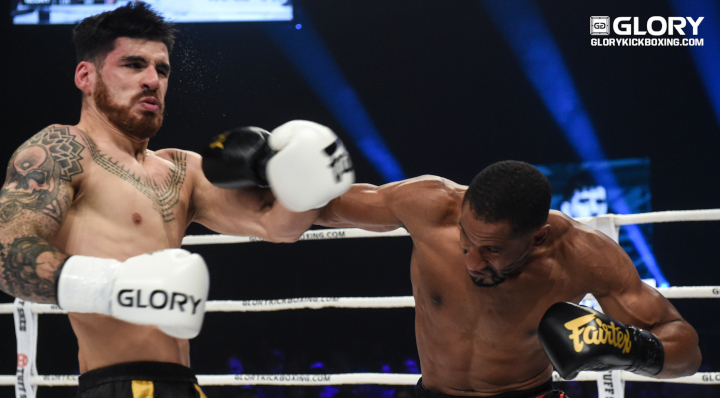 Boyd mixes it up confounds Scheinson

Scheinson powered forward and closed the distance on Boyd. Boyd was quick to engage and the pair traded wild punches. Both fighters settled in and began to score with low kicks.

A looping right hand from Boyd found the jaw of Scheinson, but the Argentinian wore it well. Scheinson looked to brawl, with Boyd putting together combinations. Boyd was warned for holding late in the round.

Round two opened with flashy attacks from Boyd. Scheinson walked through the strikes, but did absorb a pair of right hands as he waded inside to boxing range.

Scheinson pushed the pace and closed the distance. Each threw short punches from clinch range. Neither fighter was able to establish a rhythm and the sluggish frame eventual came to an end.

Boyd was very aggressive to open the final three minutes. He cracked Scheinson with a massive right hand as he came forward.

That didn’t deter Scheinson as he marched forward like a zombie. Boyd continued to throw as the round progressed, even mixing in a lead-leg hook kick. Scheinson slowed in the fight’s waning moments.

The results were revealed and it was Boyd who came out on the top. The American moved his GLORY record to 5-0 with the most complete performance of his promotional tenure.

“I thank Alan for taking the fight. He’s the toughest guy I’ve fought. Thank you GLORY for giving me an international fighter,” said Boyd.

“Keep giving me better guys and I’ll show who’s the best. I can hang. I’ll stand my ground no matter what.”