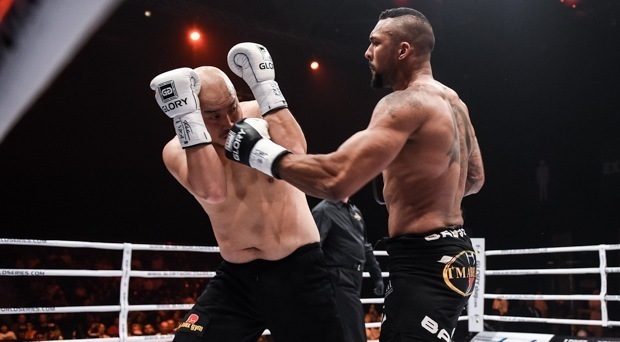 His win over South Korean Heavyweight Yongsu Park is the fastest knockout in GLORY history and now the ‘Real Chopper’ is looking to keep his momentum going as he enters the GLORY 21 SAN DIEGO Heavyweight Qualification Tournament.

“This tournament is all about new blood. This is four new Heavyweights battling it out for a chance to enter the next Heavyweight Contender Tournament, which carries a World Heavyweight Championship title shot as its’ prize,” says Cor Hemmers, GLORY Matchmaker and Head of Talent Operations.

“Lewis-Parry could not have been any more impressive in his debut, stopping the much more experienced Park with one of the single biggest punches we have ever seen in this organization. That is how to make an entrance!”

Also in the tournament is Xavier Vigney (6-1, 6 KO’s). The Californian was set to be Lewis-Parry’s opponent in Dubai before being relocated to the San Diego tournament. Their brief link was enough to set Lewis-Parry off though.

“Vigney is a bum. He is a one-trick pony, all he has got is that right hand. So I would be very confident of taking him out, yes” he said in an interview prior to his fight with Park. However, Vigney is in the opposite bracket to Lewis-Parry for the Heavyweight Qualification Tournament, which means they can only meet in the final.

Lewis-Parry is matched with Everett Sims (0-1) in the semi-final stage. Decorated amateur Sims made his professional debut at GLORY 19 VIRGINIA with a stoppage loss to Vigney on the SuperFight Series card, raising Vigney to 2-0 in the organization with both wins inside the distance.