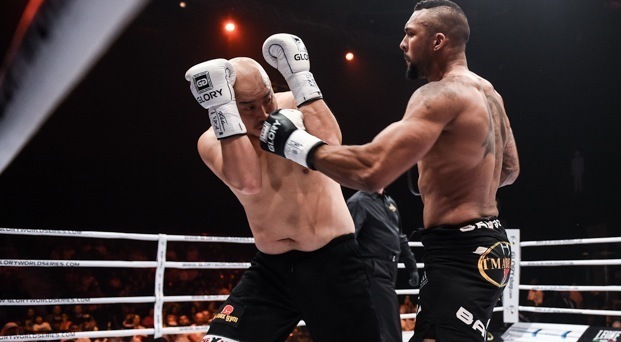 ‘Chopper’: “Victory is a given; no Heavyweight moves like me”

“It’s already done, I am preparing my victory speech. You are looking at the tournament winner right now,” he says, delivering the line in an amused tone of voice which suggest he is both ‘playing the game’ and yet totally convinced of what he says.

Vigney was set to be Lewis-Parry’s opponent at GLORY 20 DUBAI but he was then moved to the San Diego tournament and Lewis-Parry got Yongsu Park of South Korea instead. He made short work of Park but the brief pairing with Vigney has stayed on his mind; he has been trash-talking the Californian relentlessly ever since.

“Why am I picking on Vigney? Haha, why, is he crying about it? Has he been asking for me to lay off him?” he laughs.

“Look, this is the fight game, let’s make it interesting. You’ve two up and coming guys here, we are coming from two different sports, he has background in football, mine is in basketball - ready made rivalry.”

‘Chopper’ is coy when it comes to the question of whether there is any foundation to his beef with Vigney. “It doesn’t matter if we really hate each other or not - and maybe we do end up really hating each other - but that makes it really interesting for the fans,” he explains.

“Look at that recent fight between Jon Jones and Daniel Cormier [in the UFC]. The build-up to that one was nuts, fans were going mental. The fight itself was dogsh-t but the hype was incredible, really enjoyable. Fans love that, they were on the edge of their seats just like they are for Aldo and McGregor.

“The guys who get remembered are the guys who captivate the fans and give them what they want to see. We are here to fight and we are doing this for ourselves and our families but we are also entertainers.”

Rather than responding in kind Vigney has maintained a rather dignified silence to date, though Lewis-Parry says he is hoping to hear something in kind back from his opponent. “Don’t be one of those guys who is like, ‘I’m going to do my talking in the ring’. That is so boring,” he says.

If he wins the Heavyweight Qualification Tournament, Lewis-Parry will earn himself a spot in the next Heavyweight Contender Tournament, which carries as its main prize a title shot against the champion, currently Rico ‘The Prince’ Verhoeven (45-10, 11 KO’s).

Contender Tournament participants are drawn from the upper echelon of the rankings which means Lewis-Parry would find himself facing two top-ten opponents in one night, just three fights into his GLORY career.

“I wouldn’t bother with this tournament if I wasn’t ready. These other guys in the [Qualification] tournament, if they made it through, people would doubt their ability to hang with it. They would make an easy semi-final for someone [in the Contender tournament],” he says.

“But I am not an easy fight for anyone. I am here to make an impact and I am not going to do that by fighting bums like Vigney. I want the big names, not guys who fans look at and are like ‘Meh, I might get a hotdog while this guy is on’.”

Names don’t come much bigger than Verhoeven’s at present and Lewis-Parry has already given thought to how he and the young Dutch champion would match up.

“My best assets are my speed and my agility. I have a spring in my step. I like to be explosive off the mark, I like when people can’t tell what is coming from where. I think I am the most athletic guy in the GLORY Heavyweight division,” he says.

“You look at a guy like Rico, he is a big guy, great physique, but he doesn’t move so fluid as I do and that’s why I think he would come unstuck with me. And that’s not me talking ‘in character’ to hype anything. I really don’t see his movement being anything to match mine. And that’s a big ring…

“That’s why I like what Benjamin Adegbuyi does. He moves quite similarly to me. I think he is awesome. Uses his range well, throws really good combinations, definitely one to watch. If him and Rico fought I think he would take Rico’s belt.

“He’s going to be a tough guy to beat because he knows how to use his height, he is young and hungry but he has good experience. He is the guy to watch…. After me, obviously, durr.”