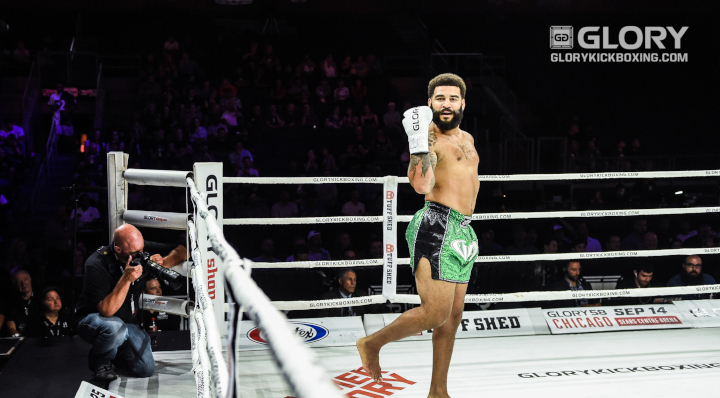 Dennis: “I called Camozzi out because I like easy fights!”

Myron Dennis says he had solid reasons behind chasing a fight with Chris Camozzi for next weekend’s GLORY 61 event in New York City.
“GLORY knows I like easy fights, that’s why I picked on Camozzi - he’s the easiest fight in the light-Heavyweight top ten for me,” deadpans the Oklahoma City fighter.
“You look at his last fight, in Denver, he only knocked John King out by altitude. He didn’t have altitude on his side in Los Angeles and that’s why Mike Lemaire was able to touch him up.
“Camozzi was tired even though he lives at altitude. As if like he's never trained in Denver before.... Come on bruh.”
Dennis was also on August’s GLORY 56 DENVER card. He and Camozzi were supposed to take part in a four-man tournament, but it fell apart when one of the participants was forced to make a last-minute withdrawal.
Local fighter Steve Paprocki stepped in to take the vacant slot against Dennis but fell victim to a first-round stoppage by way of suffering three knockdowns in one round.
“Shout-out to Steve "Paprika" for taking the fight last minute while all of Denver's other Light Heavyweight's had every excuse not to take the fight,” says Dennis.
“Camozzi fans better be lucky he didn't come out a second time that night to fight me. I would have hit my dance moves before ending him with a mortal combat fatality like I did ‘Paprika’
“His fans are trashy, ugly, and just downright uneducated. They are jealous because I showed them how a real man is supposed to move his body when he dances.”
Dennis’ win in Denver followed a loss to interim light-Heavyweight champion Pavel Zhuravlev earlier in the year, when Dennis stepped up to fill a vacant slot against the highly-ranked Ukrainian.
Zhuravlev was predicted to make short work of the fight but Dennis surprised his detractors by taking ‘The Caiman’ the distance and landing several heavy shots in the process.
“That fight with Pavel, people said I was too low caliber to be fighting him. The fight with Paprocki, people said I was too beast to be fighting him. People are never satisfied!” says Dennis.
“I’ll tell you what though: I definitely deserve to get knocked out in GLORY at some point, but if Pavel couldn’t do it, some MMA fighter with arm-punches and sh—ty knee strikes like Camozzi definitely can’t.”
GLORY 61 NEW YORK KICKBOXING takes place at the Manhattan Center Hammerstein Ballroom in New York City on Friday, November 2.