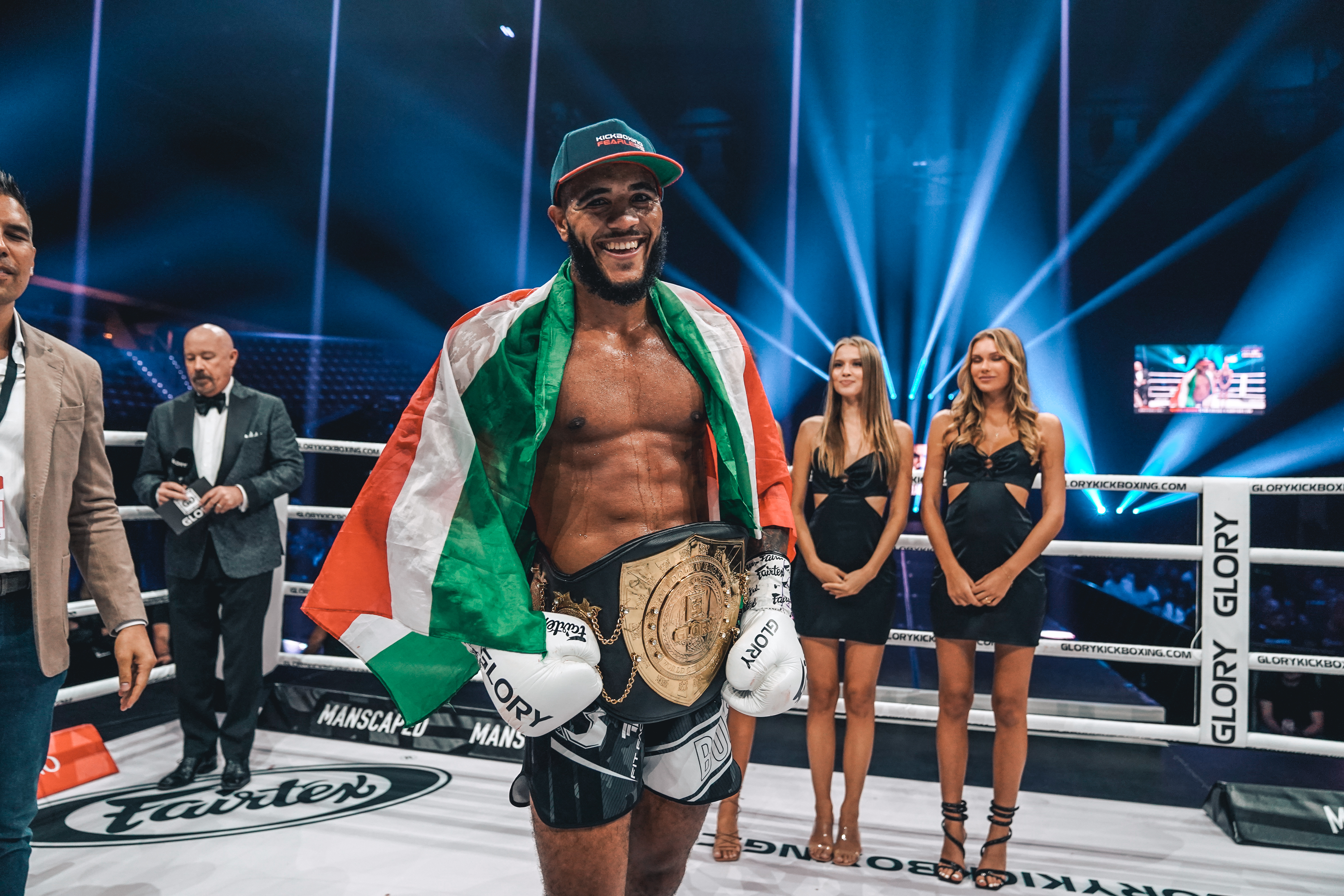 We spoke to newly crowned Middleweight Champion of the World Donovan Wisse. He won the title at GLORY 78 September 2021. We talked about GLORY, upcoming fights and his future plans now that he is the champion.

The last time you were in the ring was in September 2021, what have you been up to since then?

Since that time, I have returned to Suriname, where I also live. Celebrating the win, of course. I've had many meets and greets, such as meeting the president and vice president. I have also had meetings with many other ministers. Those were fun moments.

You have become GLORY world champion. What has changed in your life?

Not much really. I just stayed myself. Some sponsor offers have come in of course. That's always good. For the rest I stay focused and sharp. You just have to keep doing the work to stay champion. That mindset has not changed.

When you became champion, you were only 24 years old. How do people react when they hear that you have already achieved this at such a young age?

I really wanted to be the youngest GLORY champion ever, but Tyjani Beztati beat me to it. I didn’t like that very much, but I'm happy for him. People react very positively. I still have a great future ahead of me, so there are still great things to come.

What do you do besides kickboxing?

I don't really have any other hobbies outside of kickboxing. I have a gym in Suriname, so I take care of the lessons for the youth. I have a fairly young group, many teenagers. I like working with them. When I'm in the Netherlands I train at Kickboxing Fearless in Wassenaar. This is actually my only hobby, my job. I just enjoy it.

What went through your mind when you were told that you could fight for the title during GLORY 78?

The fire in my body was immediately rekindled. It was already there, of course, but when I heard that, I immediately wanted to go to training camp, I immediately wanted to know who my opponent was, I wanted to know everything right away. It was a minus that the event was postponed. I was actually just going to leave, but on the day of departure I was told that the event was postponed. I had to run again, was demotivated and thought 'here we go again'. Fortunately, it ended well and now I am world champion. It was a very nice training camp and I had very nice moments. In the Netherlands, I trained at Fighting Talents in Den Bosch. I got a lot of love there, but also blows while sparring. At times I was touched, but I just had to keep going. Some moments went well, some less so. It was quite a journey, we had to overcome many things. It was a very nice experience overall.

What was your reaction when you heard that you had to fight Yousri Belgaroui again?

I knew right away that I was going to win this fight again. I had already beaten him and I was going to beat him again. I can't win against someone the first time and then lose the second time. That doesn't work in my head. If you've won, you have to keep winning. I was so confident, I knew what I was going to do. I knew if I trained like that, that man would never beat me.

During the press conference, you sneered at each other, and it seemed that you didn't really like each other. Is that true?

Can you tell us how the evening went for you?

From the warmup, I knew I was sharp. During the fight, I saw the uncertainty in Yousri. We were standing close to each other, and I felt that his energy was not so pure. And this was only at the press conference. When I stood in the ring, I already knew that today would be mine. It doesn't matter when or how, today is mine. In the third round it was over and then I was very happy. 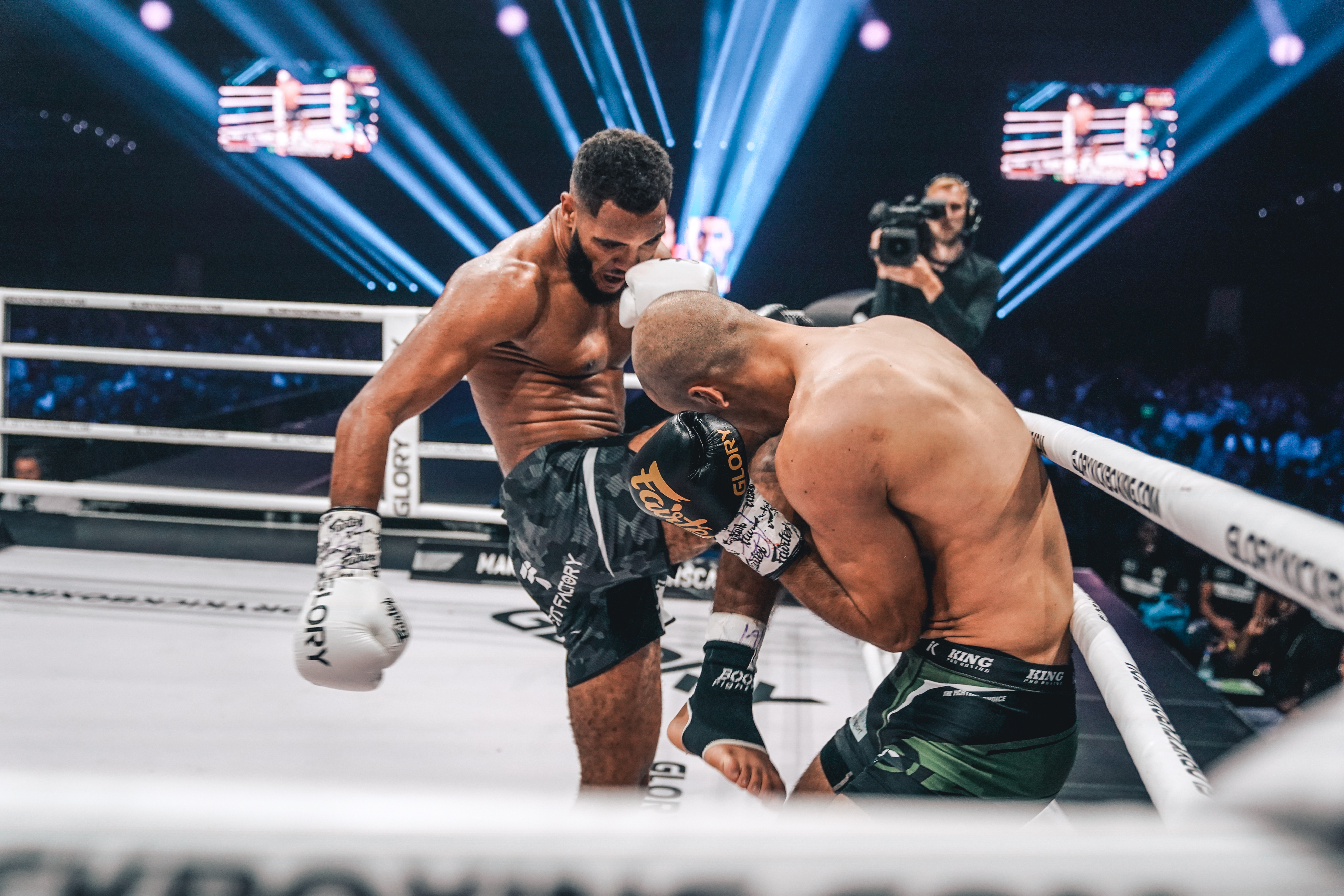 What was the first thing that came to your mind when you won the title?

All the hard work paid off. Your dream. If someone asked me “what do you want to do?” I always replied with “I want to be a kickboxing champion, I want to be a GLORY champion.” I said it and it has come true. It was a fun moment, I couldn't stop laughing.

How do you look back on your GLORY career so far?

Very positive, I really have nothing to complain about. I had one setback and that was against Ertuğrul Bayrak. Other than that, I enjoyed my entire journey. I took my chances, I took a few fights on short notice. I am satisfied.

What is the next challenge for you?

That's the next person to be put against me. So, I'm really looking forward to the fight between Ertuğrul Bayrak and Serkan Ozcaglayan. It's a very nice fight in the Middleweight division. It doesn't matter who comes, I'm just ready. Anyone can come.

How do you think the GLORY 80 fight between Ertuğrul Bayrak and Serkan Ozcaglayan will go?

Bayrak has not fought for a long time and Serkan's debut was very quick. I think if Bayrak has good coverage and a good game plan, he can beat Serkan. If Serkan can connect with his combinations or throw a hard overhand left, it can also happen. It's a very nice fight but I'm going for Bayrak on points.

Your loss against Ertuğrul Bayrak at GLORY 62 was a close one. How was this fight for you?

It was a very tough fight. He was the better man that night. It was a split decision loss for me. Experience did play a role during that fight. I was fighting with my fatigue in my head when I should have stayed calm and controlled the fight. A few things had happened, but he was the better man that night. We just have to do a rematch, then I will definitely win. I would love to do that fight one more time, just because it will be a nice fight too. Of course, I want to win, but I know that if I am against Bayrak it will be a nice fight, very technical, combinations back and forth. This time, I will prove that I am really the champion and that I really know how to beat him, and I will. 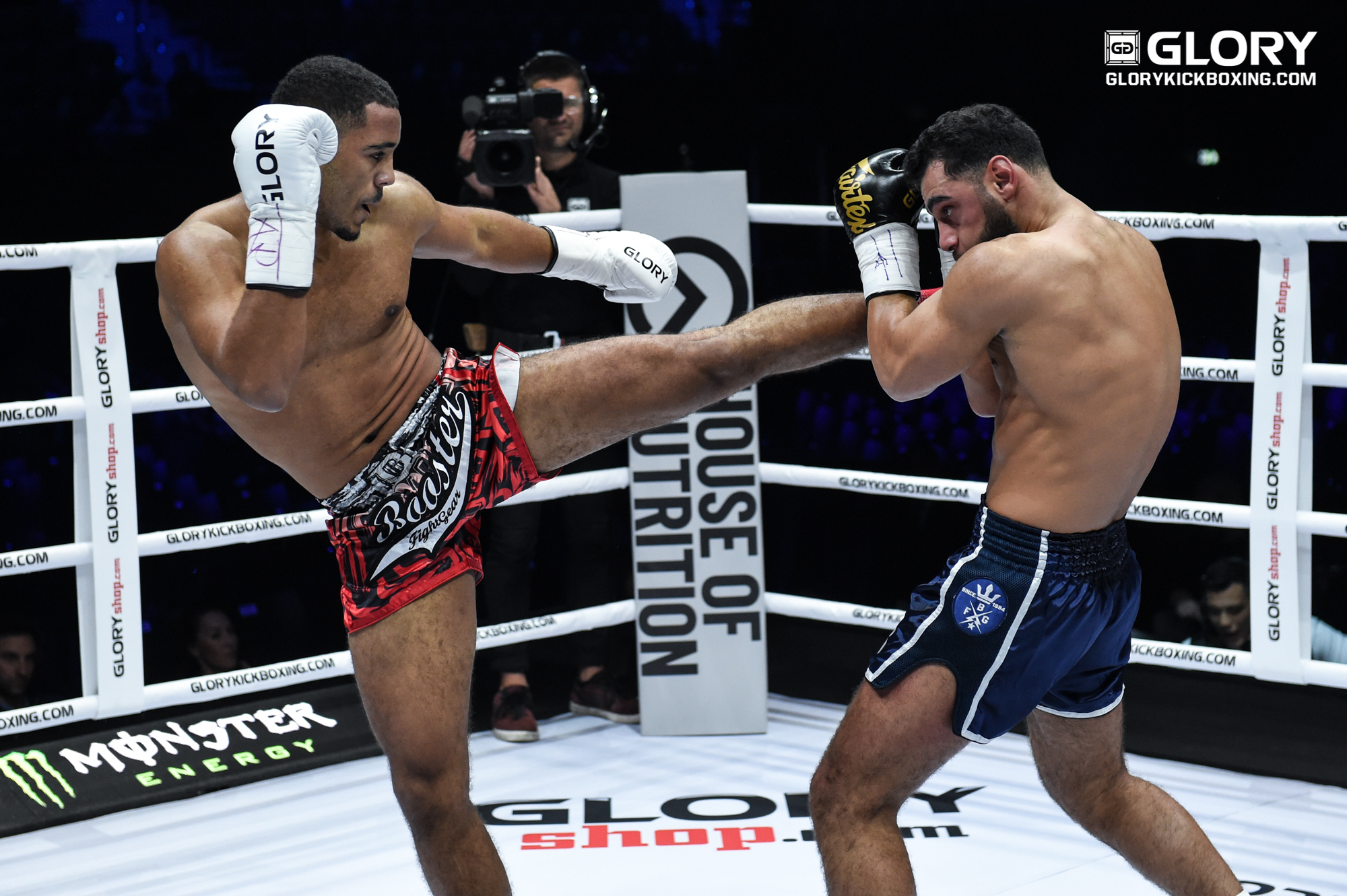 After Serkan Ozcaglayan's rather spectacular GLORY debut, he also made some statements about you and the Middleweight division. What do you think of this?

Serkan talks too much, he still has to prove himself. He didn't make it in the Heavyweight division and is now coming to try it in the Middleweights. If he comes up against me, I'll turn off his lights, if I have to say so. That man talks a little too much.

Do you ever see yourself fighting in a different weight class in the future?

Maybe I'll make the step up to the light Heavyweight division one day. Every now and then I talk about it a little bit, but I'm not really thinking about it yet. My focus is on the Middleweight division. I'd like to fight against Artem Vakhitov one day, even if it's not for the title. He is quite a technical fighter with nice combinations, I like his style. That would certainly be one of the challenges for me. For the rest, I'm focused on the Middleweight division, that's just my weight.

Were you a little sad when Alex Pereira decided to move up to the light Heavyweight division?

Yes and no. Every now and then, you hear “you are not the real champion, you have not faced Pereira.” But I can't control that man's career, it's his choice to go to the light Heavyweight division. He has his own path that he walks. I cannot help it. He's in the UFC now, I'm not.

Some big fights are on the card at GLORY 80 on March 19th. What do you think of the fights?

Yes, Badr Hari was winning the first fight against Arek Wrzosek, but unfortunately there was a kick to the head. I see Badr winning this time. Artem Vakhitov against Luis Tavares is also a very nice matchup. At the time, Tavares was still inexperienced, young. On the other hand, Vakhitov has been a champion for a long time now. I think Vakhitov will win, I like his style. Jamal Ben Saddik versus Levi Rigters is a nice fight too! If it comes down to points, I think Levi will win. But if it comes down to the first two rounds, I think Jamal will win. It's hard to say, but I'm kind of going for Jamal anyway.

Big, spectacular fights are coming again this year. Which fights are you looking forward to?

I want to see Tyjani Beztati against Josh Jauncey, that will be quite a rematch. I think Josh is next for a title fight, that's going to be a really nice fight. I see Tyjani training very hard, he is a very talented boy. I'm still waiting for Rico Verhoeven against Alistair Overeem or against Antonio Plazibat, who also made a great start with a run to the title. I also want to see Zakaria Zouggary for the title. And myself of course, no matter against who.

What is your message to GLORY fans?

Keep following me. You know when I'm in the ring, there's always a spectacle. You never know what's coming: a punch, a kick, a knee, I have a little bit of everything in me. You will always be on the edge of your seat. Keep following me, keep supporting me and you will get what you are looking for.