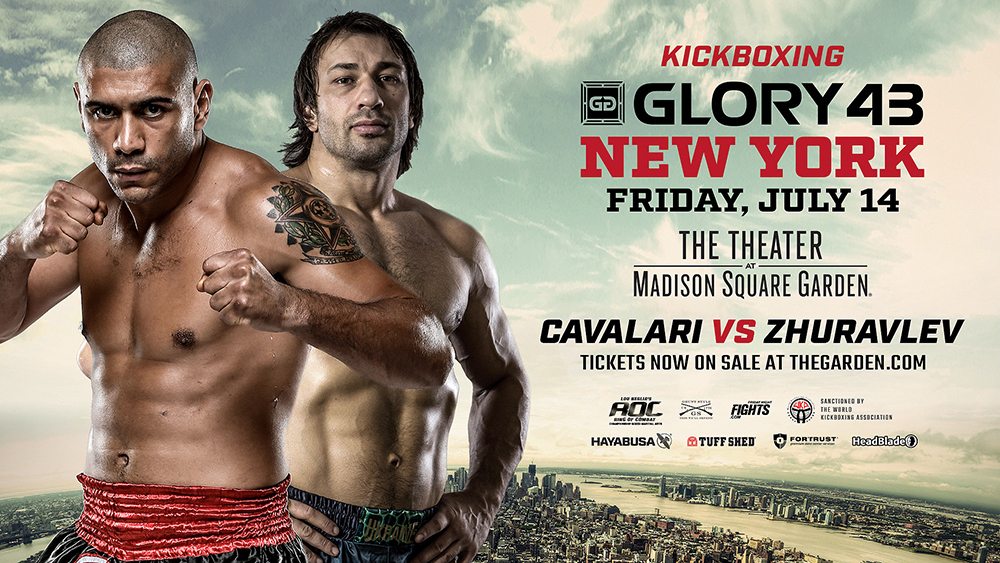 His opponent will be No. 2-ranked powerhouse Pavel "The Caiman" Zhuravlev (70-11, 26 KO, fighting out of Ukraine), returning to the GLORY ring following a first round knockout of Zinedine Hameur-Lain at GLORY 35 Nice in November.

Cavalari is currently ranked No. 4 in the division and challenged for the light Heavyweight title in his last outing. Zhuravlev holds a victory over Cavalari, earning a unanimous decision victory against the Brazilian knockout artist in 2012.

An injury to Featherweight Chris Mauceri has forced him from the bout with 19-year-old Road to GLORY UK tournament runner-up Bailey "Bad Boy" Sugden (8-1, 2 KO, fighting out of the United Kingdom). Stepping in to replace Mauceri is Liberian-born Arthur "Blackdragon" Sorsor, who now trains out of nearby Connecticut.

The complete six-fight card for GLORY 43 SuperFight Series can be found below:

Romania's Adegbuyi enters the bout on a three-fight winning streak, while No. 9-ranked Inocente has compiled a 4-1 record since joining the organization.

The five-fight card for GLORY 43 SuperFight Series can be found below:

An opponent for Josh Jauncey will be announced at a later date.

Tickets for GLORY 43 New York and GLORY 43 SuperFight Series, priced between $55 - $350, are on sale now. Tickets are available for online purchase at ticketmaster.com and at the Madison Square Garden box office.

GLORY will be working locally with promoter Lou Neglia and with Justin Blair's Friday Night Fights to bring New York this exciting evening of stand-up striking.