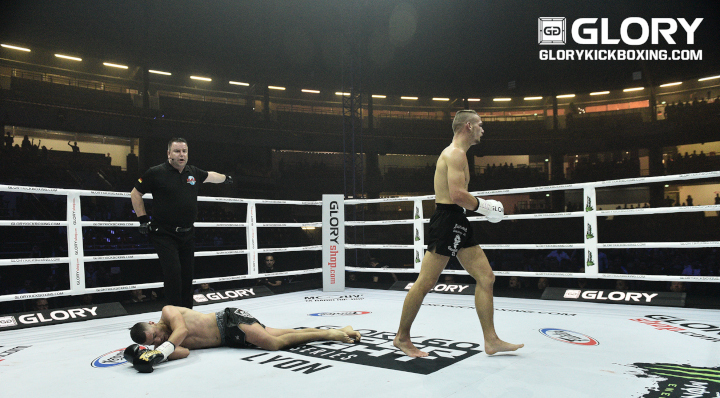 GLORY returned to France for its 60th event, visiting the Palais de Sports De Gerland in Lyon. The card opened with a five-fight preliminary card.

In the preliminary-card Headliner, Thailand’s Thong Fairtex (66-20-3, 25 KO’s)made his GLORY debut against France’s Victor Bordage (21-5). The southpaw Thong fired a series of left head kicks to open the bout. Bordage came forward with punches to close the range and get inside.

Whenever Thong found an opening, he cracked Bordage with a head kick, forcing the Frenchman to block. Bordage was the aggressor to start the second round, throwing wild right hands. Thong just smiled as he evaded the barrage along the ropes. The left kick of the Thai continued to frustrate Bordage at range.

The frustration boiled over in the third round, as Bordage just pushed Thong to the canvas. It had no effect, as Thong willingly exchanged with Bordage and landed high kicks at will. A left hand from Bordage landed in the fight’s final minute, but it was too little, too late, as Thong took the fight on all five scorecards.

The penultimate preliminary card match-up featured Welterweights Mehdi Kada (14-3, 5 KO’s) and Mustafa Yasar (12-3-1, 5 KO’s). Yasar was lightning-fast with his kicks in the first round.

Kada was forced to keep a high guard to defend. A left hook from Yasar rocked Kada midway through the round, but he was able to clinch and stay on his feet. The tables turned in round two as Kada rocked Yasar early and earned the fight’s first knockdown with punches.

Yasar was able to recover, but it was only for a moment as Kada attacked the body with a knee and sent him down again. Yasar stayed on his knees and could not beat the count, handing Kada his fifth career finish.

The swing bout took place in the Lightweight division as Guerric Billet (30-2, 14 KO’s) met Hafid Romdhane (78-11-3, 32 KO’s). Billet went straight to work with low kicks. Romdhane did his best to walk through them, but was countered with punches from Billet.

A snapping right hand from Billet found its mark as Romdhane looked to close the distance. Billet was relentless with combinations in a strong opening round. Round two mirrored the first early, as Billet again attacked the lead leg of Romdhane with kicks and delivered crisp right hands.

Romdhane powered forward, but left himself exposed and absorbed heavy punches from Billet. Romdhane stumbled back to his corner following the middle round. Billet patiently worked the head of Romdhane in the fight’s final frame. After multiple heavy shots wobbled Romdhane, a massive uppercut from Billet sent Romdhane crashing to the mat and he could not recover.

More Featherweights graced the ring as Geoffrey Vivies (8-5, 3 KO’s) clashed with Said Ahamada (23-5, 11 KO’s). Ahamada used his pressure to stifle the offense of Vivies early. Vivies threw low kicks, which were countered by clean punches by Ahamada. A knee strike from Vivies landed above the right eye of Ahamada, opening a cut.

The right low kick of Ahamada frequently sent Vivies tumbling to the canvas in round two. The counter right hand from Ahamada landed with regularity as Vivies looked to get into boxing range.

Vivies picked up his output in the fight’s final round. His combinations backed Ahamada against the ropes and the pair went to work in the clinch. Both fighters fought hard until the final bell, with Ahamada edging his fellow Frenchman on the scorecards.

The night’s action began with a battle of French Featherweights as Yoann Mermoux (26-10, 7 KO’s) took on Franck Reoutzkoff (63-12, 39 KO’s). The kicking arsenal of Mermoux was on full display in the fight’s opening round, as he peppered the legs and midsection of Reoutzkoff.

Reoutzkoff responded with a flying knee in the corner, but did not connect clean through the guard of Mermoux. The pace picked up in the second stanza, with both fighters firing combinations.

The knees of Reoutzkoff started finding a home. Mermoux tried to keep his range with push kicks, but it did not slow the advance of Reoutzkoff. Mermoux’s output was the story, as he consistently delivered low kicks and punches. Reoutzkoff never stopped coming forward, but ultimately fell short on the scorecards.