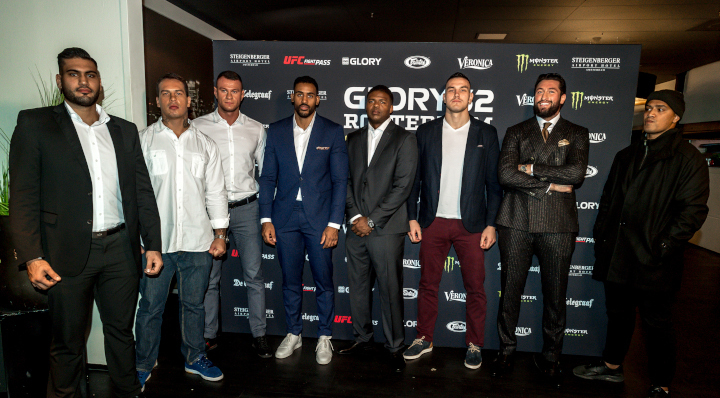 All eight GLORY 62 Heavyweight Grand Prix tournament fighters were in Amsterdam, Netherlands today for a draw to determine the four opening matches of the one-night contest.
The four highest-ranked fighters - Benjamin Adegbuyi, Jamal Ben Saddik, Jahfarr Wilnis and Guto Inocente - were already seeded, which left their opposing slots to be determined today.
Junior Tafa, Mohamed Abdallah, Tomas Mozny and Arkadiusz Wrzosek drew lots to determine which of them would take first pick of the four vacant slots.
Abdallah got first pick and chose Inocente. Tafa chose Ben Saddik, Mozny went with Wilnis. Only Adegbuyi, the #1 ranked contender and tournament favorite, was left without an opponent. That spot passed to Wrzosek by default.
The ceremony was staged and presented by VERONICA, the television partner of GLORY in the Netherlands. Here’s what the fighters had to say, as noted by reporter Kris Dekker on the day:
Benjamin Adegbuyi on Arkadiusz Wrzosek: “Every opponent is tough. He’s a tough competitor, so I’m happy about it. I’ve watched a bit of everybody, he’s a durable fighter. In GLORY, you can’t have an easy fight.
“[I’m gonna win this tournament because] I have experience, a strong mind and don’t give up. I have all it takes to win. You need a bit of luck, always with an eight-man tournament. But it’s always here [in you mind, that you win].”
Arkadiusz Wrzosek on Benjamin Adegbuyi: “There are no easy fights in this tournament. They are the best fighters in the world. Benny is #1in the GLORY rankings, but he’s still human. In this fight we will show that.’
Jamal Ben Saddik on Junior Tafa: ‘I’m ready. He looks full of self-confidence, but that’s normal with so many guys here. But next week, we’re in the ring and then he’ll regret choosing me. I’m gonna beat him very quick, especially after challenging me a bit. He doesn’t know what’s waiting for him next week.
“He talked tough about fighting me backstage. He regrets it now. D’Angelo Marshall challenged me as well for GLORY Amsterdam in September and he’ll never do that again.”
Junior Tafa on Jamal Ben Saddik: ‘I’m gonna beat everyone in here. I like Jamal, he’s a very pretty man, but the day after the fight he’s not gonna look the same.”
Guto Inocente on Mohamed Abdallah: ‘I’m very happy. I think it’s a good fight for me, I can’t wait. I don’t know why [he chose me]. I couldn’t choose between the eight guys, but anyone is a good one for me. Maybe he picked me because I’m smaller, I don’t know.’
Mohamed Abdallah on Guto Inocente: ‘I chose Guto because I think my style fits his style. I already made the choice that if I could choose who I could fight, I would choose him because his last fight was against the champion. For me, there’s nothing to lose, I just can win.’
Jahfarr Wilnis on Tomas Mozny: “I’m satisfied. I didn’t have much of a preference, this is good. He has guts [to pick me].”
Tomas Mozny on Jahfarr Wilnis: “I chose Jahfarr because he looks like a [favorable] fighter for me. I think I have a chance to win from him.”
The eight-man Heavyweight Grand Prix takes place next Saturday, December 8 at the Ahoy Arena in Rotterdam, Netherlands as part of GLOY 62 ROTTERDAM.
On the line for the winner is $100,000, with various bonus payments for tournament runners-up.