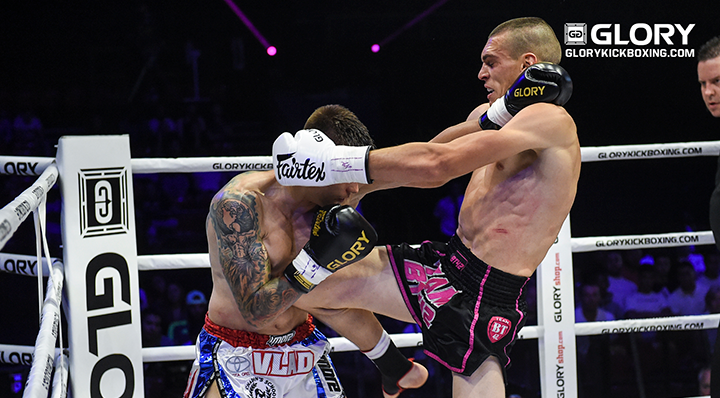 On Saturday, June 22, GLORY Kickboxing returned to France for its 66th event in Paris.

The preliminary card was Headlined by a Lightweight fight between France’s Michaël Palandre (30-2, 12 KO’s) and Russian Vlad Tuinov (41-4, 13 KO’s).

Palandre tried to keep his range, but Tuinov wasted no time closing the distance and attacking with punches. Tuinov fired a spinning back kick and followed it with a spinning backfist. Palandre kept a high guard to block the punches of the Russian fighter.

Palandre used outside kicks to counter the boxing of Tuinov. Round two began with a firefight as both combatants threw heavy punches in the pocket. A left hook from Tuinov cracked Palandre on the jaw, but the Frenchman wore it well.

The kicks of Palandre appeared to take some sting off the punches of Tuinov as the fight progressed. Tuinov rocked Palandre early in round three, but he did not go down. The Russian again landed a left hook with a minute left in the fight, but Palandre was able to absorb it.

The fighters swung until the final bell, but the judges were called upon to determine the winner. The judges were split, but Palandre walked away with the win.

Czech Middleweight Matěj Peňáz (22-3, 11 KO’s) made quick work of Frenchman Matthieu Ceva (1-2). The size difference was evident right away as the towering Czech fired his jab from range.

A right hook from Peňáz dropped Ceva less than a minute into the fight. Ceva tried to recover but Peňáz was relentless. A straight left dropped Ceva again just 30 seconds later. Ceva got back to his feet, but only for a moment as Peňáz earned a third knockdown and the finish.

Billet came out firing combinations. He peppered the body of Goldie-Galloway and closed with low kicks. A flying knee from the Frenchman missed the mark, but he followed with a pair of right hands.

Goldie-Galloway tried to counter with knees and short punches. Billet backed the Brit against the ropes and landed a series of punches. The forward advance of Billet continued in round two and he kept Goldie-Galloway on his heels.

A spinning back-kick from Billet caught Goldie-Galloway in the liver and earned the fight’s first knockdown. As Billet looked for a finish, Goldie-Galloway recovered and fired back with heavy shots of his own.

The low kicks of Billet were a big weapon to start round three. Goldie-Galloway desperately sought a finish, but it opened him up for counters from Billet. The fight went the distance, but the result was never in question as Billet captured the clear-cut victory.

The night’s action kicked off with a women’s Super Bantamweight match-up between Frenchwomen Sarah Moussaddak (10-0, 3 KO’s) and Aurore Dos Santos (2-1). The 19-year-old Moussaddak opened with a barrage, forcing Dos Santos against the ropes.

The right hand of Dos Santos was a weapon at range, but Moussaddak found success in boxing range. The output of Moussaddak never waned, as she pressured Dos Santos in the fight’s final frame. The judges at ringside rewarded Moussaddak’s aggression, putting the first blemish on the record of Dos Santos.