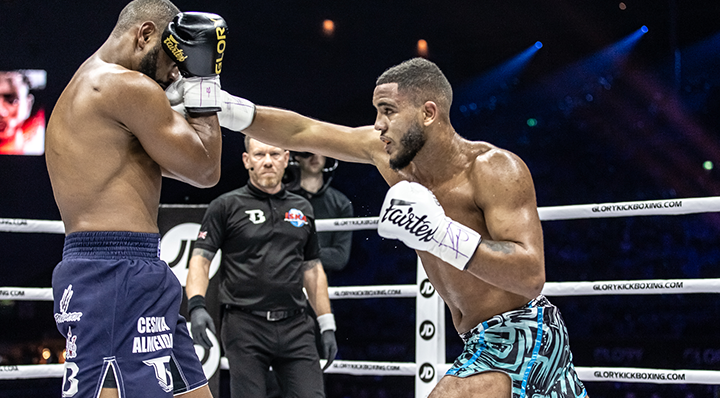 The action kicked off with a five-fight SuperFight Series fight card featuring numerous Heavyweight and Middleweight sluggers, as well as two of the sport’s most promising Super Bantamweights.

Plazibat threw with volume to start the fight, backing Wilnis into the corner. Wilnis used a high guard to block most of Plazibat’s punches. He answered with a body shot, but Plazibat swarmed with heavy shots.

He again backed Wilnis to the corner with punches. The Dutchman showcased his durability to weather the onslaught. The pair traded combinations until the round’s final bell. Wilnis came out firing in round two, ripping the body of Plazibat.

He mixed in low kicks and controlled the range. Plazibat did not wilt under the pressure, firing back at every opportunity. Wilnis finished the round strong with a series of knees along the ropes. Plazibat started round three well, landing combinations.

Wilnis answered with a clubbing right hand and a knee. The back-and-forth action saw both fighters land combinations. Plazibat pushed the pace in the final minute with Wilnis countering with heavy right hands.

One of the judges scored the bout for Wilnis, but the four other judges rewarded Plazibat for this efforts.

After an exchange of low kicks, Wisse ripped the midsection of Almeida with a left hook. He followed it with a massive left hook to the jaw that sent Almeida crashing to the canvas.

The Brazilian survived the count and the fight continued. Almeida switched to southpaw, but absorbed a heavy right hand from Wisse. Almeida attempted to clinch and was warned by the referee for an attempted takedown.

Wisse patiently countered late in the round. The second round began with a series of low kicks from Wisse. Almeida again worked from southpaw and delivered a knee. The Brazilian started to find success with combinations, but caught Wisse in the cup and the action was paused briefly.

A right straight from Wisse landed clean to close the stanza. Almeida came forward to start round three and scored with a knee to the body. He backed Wisse to the corner and scored with punches.

Wisse fired back and retook the middle of the ring. Almeida just missed with a spinning kick as Wisse ducked under the technique. The judges were called upon to render a verdict and it was Wisse who earned his fourth straight win in the GLORY ring.

A Heavyweight clash between Frenchman Nordine Mahieddine (25-9, 12’s KO’s) and Turkey’s Cihad Kepenek (22-6, 15 KO’s) served as the third bout of the evening and needed an extension round to determine a winner.

Kepenek backed Mahieddine the ropes with his boxing. Mahieddine responded with low kicks to retake the center of the ring. Kepenek worked the body with a big left hook. The right hand of Mahieddine connected with the jaw of the towering Turkish fighter.

A counter left hook from Mahieddine caught Kepenek clean and earned the night’s first knockdown late in round one. Mahieddine opened the second frame with a head kick, but Kepenek was able to block it.

The French fighter showed off his superior hand speed, landing combinations with volume. Kepenek picked up his output late in the round, backing Mahieddine to the ropes and staying in his face.

A wheel kick from Mahieddine just missed to open round three. He followed it with an axe kick. An uppercut from Mahieddine popped the head of Kepenek. The Turkish fighter backed Mahieddine to the corner and unloaded with a series of punches.

Mahieddine slowed down late, allowing Kepenek to overcome the early knockdown and push the fight to a fourth round. Kepenek was the aggressor in the extra frame, but Mahieddine was able to land low kicks and a big right hand.

Kepenek responded with a pair of devastating uppercuts. Both fighters pushed the action to the final bell, with Mahieddine clipping Kepenek late with a left hook that proved to be the difference. The judges were split, but it was Mahieddine who left with the victory.

Bokeme did a good job of checking the kicks from van Heeckeren early in round two. He continued to work the body of the Dutch fighter along the ropes. A heavy knee from Bokeme appeared to stun van Heeckeren midway through the frame.

Van Heeckeren stuck with his low kicks. The crisp techniques from Bokeme were on display in the last stanza. He mixed in knees to batter the midsection of van Heeckeren. The Congolese fighter was relentless with his attack, forcing van Heeckeren to cover up and defend.

The fight went to the scorecards, but the result was clear as Bokeme earned the judges’ nod.

The Sanda practitioner Xu repeatedly looked for her overhand right and followed it with low kicks. The taller Irwin utilized her kicks to slow Xu’s pressure. The aggression of Xu continued in the middle round, as she quickly backed Irwin into the corner and found a home for her right hand.

Irwin tried to remain patient and counter, but she could not match the output of her opponent. The body kicks of Irwin were more and more effective as the fight progressed.

The volume from Xu decreased in the fight’s final round and she struggled to navigate the reach of Irwin. The American mixed up her levels with both her kicks and punches, frustrating Xu.

The fight went the distance and it was Irwin who kept her undefeated GLORY record intact. “It was great to get a win here in Holland on this big event,” said the victorious Irwin.