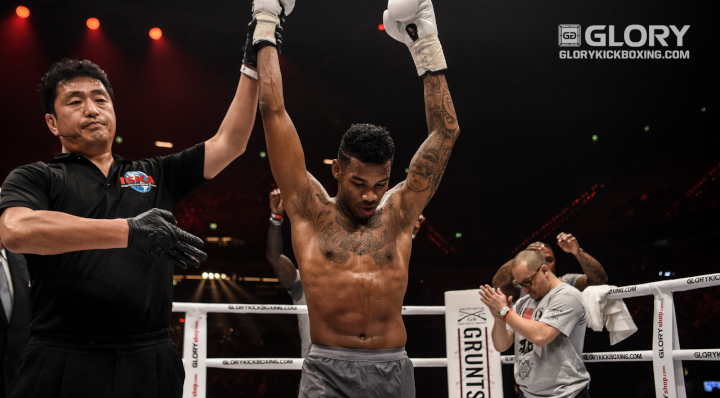 With Kevin VanNostrand moving to replace injured champion Robin van Roosmalen against Petchpanomrung, Massaro Glunder has been removed from this Friday’s GLORY 55 NEW YORK event lineup.
Glunder was originally set to face VanNostrand, until a shoulder injury forced Van Roosmalen off the card two weeks ago. Former interim champion VanNostrand was taken out of the slot against Glunder and matched with Petchpanormung, with the interim title again on the line.
The short window of time has not allowed for a suitable replacement opponent to be booked for Glunder and he has now been removed from the card and will be reassigned to another event in the near future.
Glunder’s removal means a change in the evening’s running order. Heavyweights Junior Tafa and Anthony McDonald now move from the SuperFight Series card to the Main Card, where they will compete just before the first of the card’s two headlining title fights.
The GLORY 55 SuperFight SERIES card now features six fights and the Main Card features five.
Former Welterweight champion Cedric Doumbé Headlines the SuperFight Series card in a showdown with Argentinian counterpart Alan Scheinson. In the co-main, former super-bantamweight champion Tiffany van Soest faces Swedish Muay Thai champion Sofia Olofsson.
Headlining the Main Card is Middleweight champion Alex Pereira; he faces Yousri Belgaroui in what will be their trilogy match. The two are 1-1 against each other and the winner of this one will walk away not only with the world title but also the bragging rights.
GLORY 55 NEW YORK takes place at the Hulu Theater at Madison Square Garden this Friday, July 20.
It will air live in the USA on ESPN NEWS from 9:30 p.m. ET / 6:30 p.m. PT and will re-air Sunday, July 22 at 9 p.m. ET / 6 p.m. PT on ESPN 2.
GLORY 55 SuperFight Series will stream live on UFC FIGHT PASS at 7 p.m. ET / 4 p.m. PT on Friday, July 20.
GLORY 55 commences with the Preliminary Card, the top three bouts of which will stream live on the GLORY YouTube channel, GLORY Facebook page, and Pluto TV channel 215 with an expected start time of 5:50 p.m. ET / 2:50 p.m. PT.