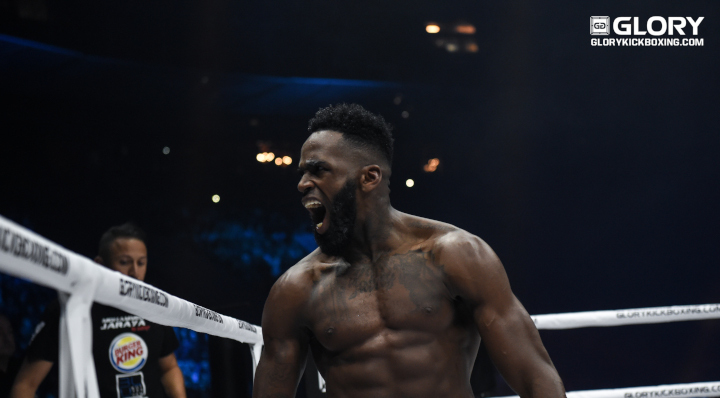 The 22-year-old Jaraya was very vocal leading into the contest, claiming that he “hated” Groenhart and had “no respect” for the former Welterweight champion.

Jaraya came straight at Groenhart. The former titleholder looked for his patented flying knee, nearly jumping out of the ring. A second flying knee attempt from Groenhart was countered with left hand by Jaraya.

A heavy right straight from Groenhart put Jaraya on the canvas. The referee thought about it and eventually started a count. Jaraya was incensed, coming even more aggressively in the round’s final seconds.

Groenhart was the aggressor in round two, taking it to the young Jaraya. A right hand from Groenhart appeared to earn another knockdown, but the referee ruled a slip.

Groenhart smelled blood, chasing Jaraya across the ring and landing a massive knee and another heavy right hand. This time, Jaraya was visibly hurt and struggled to beat the count.

Once back on his feet, Jaraya tried to recover, but Groenhart didn’t allow. He pressured the Moroccan into the corner and unloaded with a right uppercut and right straight.

It was too much for the young fighter, as the referee was forced to step in and halt the contest.

Asked about whether he believed he had earned Jaraya’s respect, “I think so. And it’s all about respect.”