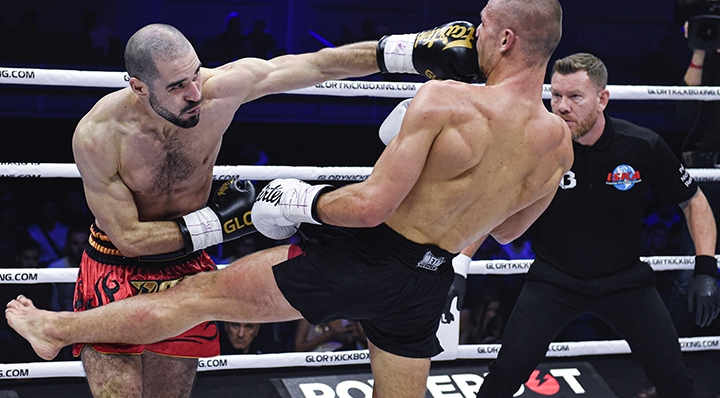 Billet opened with a combination. Hendouf used a high guard and tried to check the low kicks of the Frenchman. Billet mixed up his attack, kicking the back leg of the Belgian.

The pair traded body shots along the ropes. Billet delivered a step-in knee that got through the guard of Hendouf. The volume of Hendouf increased as the round went along, scoring with punches from inside boxing range.

Billet circled away and threw a head kick that Hendouf was able to block. Hendouf switched his stance and pressured Billet into the corner. A spinning backfist from Hendouf capped off a strong final portion of the round.

It was another fast start from Billet in round two as he returned to throwing combinations. The knees from Billet were countered with punches from Hendouf. Billet backed to the ropes and was forced to cover up.

Hendouf repeatedly found the jaw of Billet in boxing range, preventing Billet from finding a rhythm. A left hook from Hendouf caught Billet clean and he stumbled backwards. Despite the heavy shot, Billet stayed on his feet.

The final frame picked up right where the second round came to a close. Billet tried to match the pressure of Hendouf, but he was caught by another left hand as he entered the pocket. The younger fighter was unfazed, cracking Hendouf with a right of his own.

Hendouf landed another heavy shot, this time a right hand, along the ropes. After exchanging low kicks, Hendouf fired off a dozen unanswered punches to the head of Billet. Billet returned fire, but the fight went the distance.

The judges were divided, but it was Hendouf who walked away with judges’ nod.