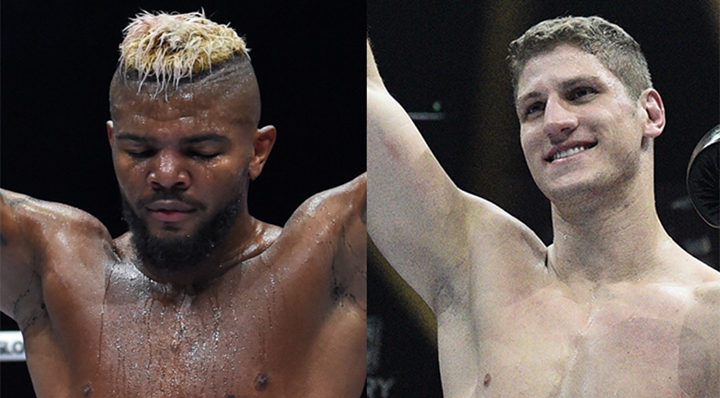 ‘The Infamous’ Luis Tavares has a new opponent for GLORY 66 PARIS next weekend.
Rotterdam-based light-Heavyweight Tavares (60-7, 22 KO’s) was due to fight France’s Stephane Susperregui next Saturday, June 22, but the French fighter has withdrawn with an injury.
Tavares will now instead face Brazilian light-Heavyweight Felipe Micheletti (15-7, 5 KO’s), who moves up from the SuperFight Series card to the Main Card for this encounter.
Both Tavares and Micheletti are staking their claim to being championship threats in the division and this fight means the two potential contenders are meeting earlier than they may have expected.
Micheletti debuted for GLORY in October with a win over Zinedine Hameur-Lain and now returns to France for this, his second GLORY outing.
Tavares fought once for GLORY back in 2013, suffering a KO loss to Artem Vakhitov, who went on to become the division’s champion.
Following that, Tavares went on a 9-1 run, eventually landing a pair of domestic championships in the Netherlands before returning to GLORY in December 2018 for a win in his home city at GLORY 62 ROTTERDAM.
Micheletti was originally matched with Artur Gorlov for GLORY 66. A replacement opponent for Gorlov will be announced shortly.
GLORY 66 PARIS takes place Saturday, June 22 at the Zenith Paris - La Villette and is Headlined by world Welterweight champion Cedric Doumbé defending the title against top contender Alim Nabiyev.