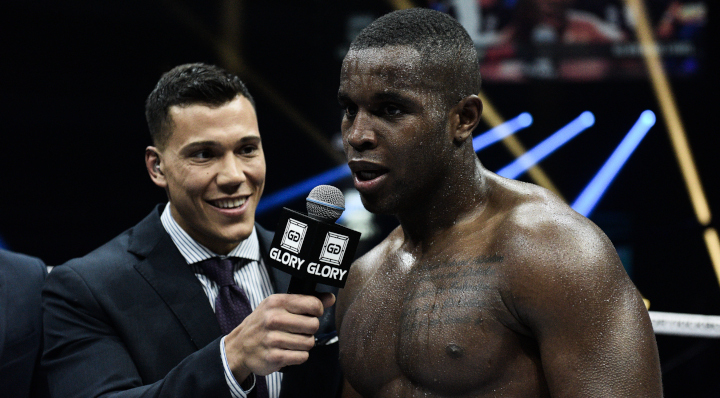 Age: 21
Record: 23-5, 6 KO’s
Height:  6'3.5'' / 1.92 m
Stance: Orthodox
Team: Mike’s Gym
Coach: Mike Passenier
Donegi Abena is not yet a household name in the kickboxing world, but he plans to change all that in the very near future.
Already ranked #1 in the GLORY light-Heavyweight contender lists, the heavy-handed 21-year-old could be on the fast track to a title shot if he can beat #4-ranked Michael Duut at GLORY 64 STRASBOURG next month.
So who is the light-Heavyweight division’s newest contender?
Abena was born in Suriname in May, 1997.
Suriname is on the north-eastern coast of South America and shares a border with Guyana and Brazil. It is a former Dutch colony and as such, Surinamese citizens generally are fluent in Dutch and are able to move to the Netherlands if they wish.
That’s what Abena’s mother did when he was two years old, taking him, his brother and their sister to the Netherlands, where they settled in Utrecht. Things unfortunately did not progress smoothly though; when his mother became very ill, Abena and his siblings had to go and live in a children’s home.
Some years on, Abena was a very angry teenager. He was also big for his age and had a hair-trigger temper. The slightest provocation was enough to have him start swinging; violence was both a distraction and a release, as well as a means of asserting some sort of control on his environment.
By the time he was 15 his fighting proclivities worried some of his friends; they feared he would end up in jail or worse. Abena had been required to leave the children’s home because of his behavior and was living in a hostel for troubled teenagers.
He was prevailed upon to start training in kickboxing. He fell in love with it his first lesson and has never looked back. Now, six years on, his record already contains multiple noteworthy wins.
As a Heavyweight he has wins over Andre Stoica and Luis Tavares, both of them GLORY veterans. He also came runner-up in an eight-man tournament, only losing out on the grand prize by way of a controversial decision loss to Mohammed Abdallah, who has also since joined GLORY.
Abena now competes at light-Heavyweight and scored a win over Stephane Susperregui in his debut at GLORY 60 LYON in October last year.
On Saturday March 9, he will face Duut in the opening fight of the Main Card. It’s a fight which is hardly expected to go the distance and if Abena can beat the veteran brawler it will be his biggest win to date.
Watch GLORY 64 STRASBOURG live on UFC FIGHT PASS worldwide and live in the Netherlands on VERONICA.