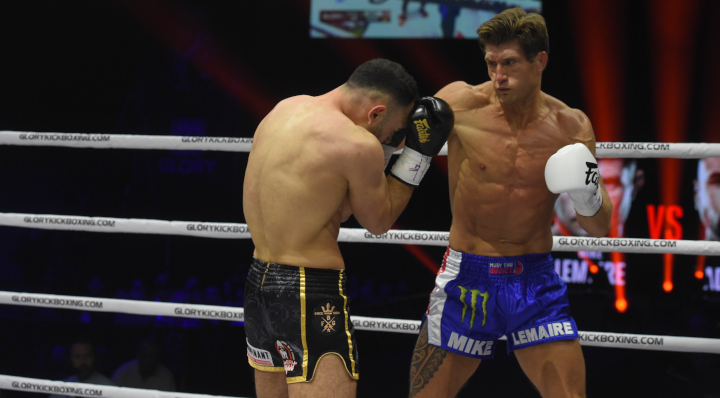 Sadikovic came out with kicks and knees. The larger Lemaire scored with a right hand at range. The smaller Sadikovic was quick to clinch and attack with short shots.

The referee warned Lemaire for holding. The German fighter backed Lemaire to the ropes with aggressive combinations, but Lemaire used a high guard to defend.

A knee to the body from Lemaire was answered by a barrage of power punches from Sadikovic as the bell sounded.

Lemaire went to work with knees of his own in round two. Sadikovic was undeterred, staying right in the face of the American. Lemaire picked up the pace, scoring with punches of his own to the guard of Sadikovic.

A push kick from Sadikovic sent Lemaire reeling and the pair clinched. Lemaire was methodical with his attack, keeping the more explosive Sadikovic from finding rhythm.

Both fighters landed combinations to open the final round. Lemaire worked the body of Sadikovic with more knees. The attack of Lemaire was very consistent, as he repeated scored with punches to the head and body of Sadikovic.

Sadikovic tried to flurry but it was met with more clinch knees from Lemaire. They fought to the final bell and the scorecards were called upon to decide the result.

Three of the five judge scored the bout for Lemaire.

“It means everything. I was born and raised in France. I’m happy to perform in front of me people. My dad is the reason that I am here. I started martial arts at age four. Everything I do is for my parents. I’ve worked so hard to be here,” said Lemaire in victory.