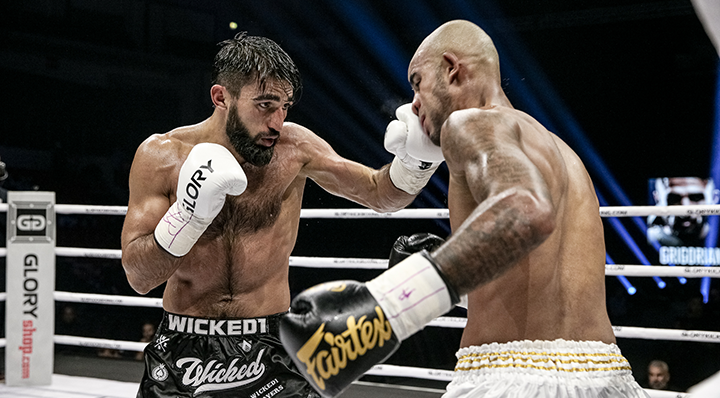 Marat: "I will break him, physically and mentally"

Marat Grigorian puts his world Lightweight title on the line for a third time this Saturday at GLORY 73 SHENZHEN as he faces undefeated challenger ‘Super’ Elvis Gashi, who has won five consecutive fights in GLORY to earn himself this shot at the belt.

Gashi, originally from Kosovo but for many years now resident in New York City, USA, has made confident predictions of not only remaining undefeated and taking the world title, but also of ending the fight early inside the allotted five rounds.

“I don’t care what he says. Many people have said the same thing. Everything looks easy until you are in the ring in front of me and you feel how powerful how I am,” shrugs the laconic Grigorian, unfazed.

“I’m going to break him physically and mentally. When he feels what I bring, he will realize that all his preparations have been for nothing, all that preparation will go away.”

Gashi’s undefeated record makes him a rarity in the sport of kickboxing, where the best fight the best on such a consistent basis that even the most dominant champions have a smattering of losses on their otherwise exemplary records.

Unimpressed, would be the best way to describe Grigorian’s take on Gashi’s resumé.

“He’s undefeated? Against who? I never heard of these guys. Nobody knows Gashi, nobody knows his opponents. But say my name and people know who you are talking about, fight fans all over the world know who I am,” he says.

“It’s a bit disrespectful for him to talk like this. When you look at my record and who I have fought against, it speaks for itself.”

Grigorian also doesn’t think much of Gashi’s observation that left-handed southpaw fighters have given him trouble in the past, citing losses to Serhiy Adamchuk and former Lightweight champion Sitthichai as evidence.

“Well, Sitthichai is a southpaw and he’s a very difficult opponent of course. But Gashi is nowhere near that level, so I’m not sure what he’s talking about there. Gashi’s level and Sitthichai’s level are very different things,” he laughs.

“I’m going to be really happy if he does that. If he comes with forward pressure, that’s going to be great for me. That’s the best kind of fight he could give me,” he smiles.

“Trust me, as long as I am in GLORY, Elvis Gashi will never be champion.”