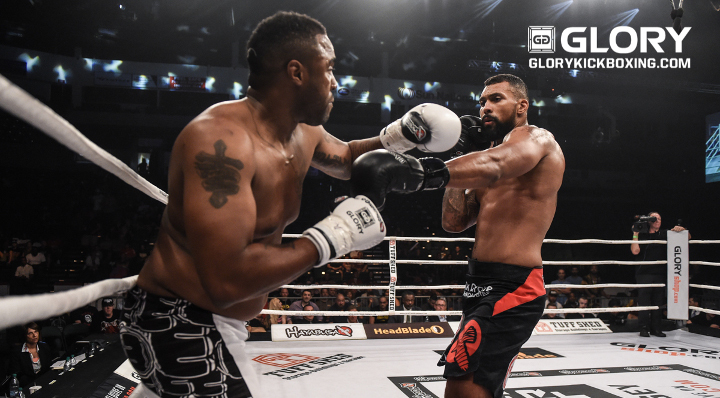 “Junior Tafa doesn’t belong in the top ten at all, certainly not #9, and I’m going to show everyone that ” says his GLORY 55 NEW YORK opponent Anthony ‘The Joker’ McDonald (8-2, 6 KO’s).
“He got an easy way in to GLORY when his [GLORY 46] opponent pulled out and he got a Joe Schmo replacement fighter instead. That dude didn’t belong in GLORY at all, he was easy work.
“But still I gave him props, said online ‘Hey great fight man, how about me and you next?’. At first he was like ‘Thanks bro’ but then suddenly out of the blue he’s like ‘Hey GLORY, let me beat this clown’ and all this stuff.
“So I was like OK, I’m gonna stay humble, let it slide, but he kept on rolling with it and then his countrymen picked up with it and then I was like f—k this, I’m gonna smash you. And I am going to expose you.”
What McDonald says he will “expose” in Junior Tafa is that the Samoan-Australian is “not a knockout artist”.
Although Tafa (18-3, 14 KO’s)  trains with the legendary kickboxer and fighter Mark Hunt, also of Samoan extraction, McDonald claims there is no comparison between the two.
“Mark Hunt is a big Heavyweight - he cuts weight to fight at Heavyweight even. He’s got crazy power but he trains really hard. Then you look at Tafa on social media - he’s drinking, he’s eating anything he wants, he’s barely training,” the American says.
“Thing is though, Tafa doesn’t have the power to get away with that. In the first round he’s looking for that power shot to take you out but if he doesn’t get it, and you push the pace, in the next rounds he’s fading out. Look at his fight with Guto Inocente for example.
“He couldn’t do anything to Guto or Benjamin [Adegbuyi]. He lost to Guto in the tournament semi-finals but went through to the final because Guto had a cut over his eye and couldn’t continue. But then he couldn’t do a thing against Benjamin.
“So that gave me intel, that he cant handle top-tier and technical fighters. He is just a brawler. If you play his game you can get knocked out but if you stick to the gameplan he wont get into the fight at all, he will be swinging at air.
“My cardio and conditioning training has been crazy. There will be constant movement. He’ll come in and swing and I’ll be already gone. People talk about his power - yeah he’s got power, if you stand right in front of him and let him swing. But if you don’t, then what has he got?”
US Army veteran McDonald, himself formerly ranked at #9, says his mission in New York is clear. “I’m going to expose Tafa, beat him, take my ranking spot back and then start climbing towards that title shot!”
GLORY 55 NEW YORK takes place Friday, July 20 at The Hulu Theater at Madison Square Garden.