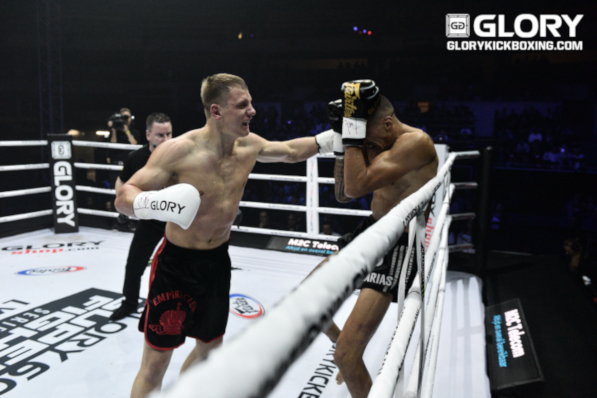 Twenty-year-old Russian Dmitrii Menshikov (20-2, 16 KO’s) put together a beautiful finish in his GLORY debut opposite short-notice opponent Samuel Dbili (7-3, 5 KO’s) of France on the GLORY 60 SuperFight Series in Lyon.

The towering Dbili went to work with kicks and long punches. Menshikov used a high guard and looked for openings against the taller fighter. Dbili threw with volume, peppering the lead leg of the Russian.

A big knee from Dbili landed along the ropes. Menshikov backed Dbili into the corner and punched the midsection. That opened up the head, where Menshikov delivered a barrage of punches and dropped the Frenchman.

He recovered, but only for a moment as Menshikov dropped him for a second time just seconds later.

Dbili would beat the count once more, but there was blood in the water. Menshikov quickly went for the finish, putting Dbili down for a third and final time before the round came to an end.