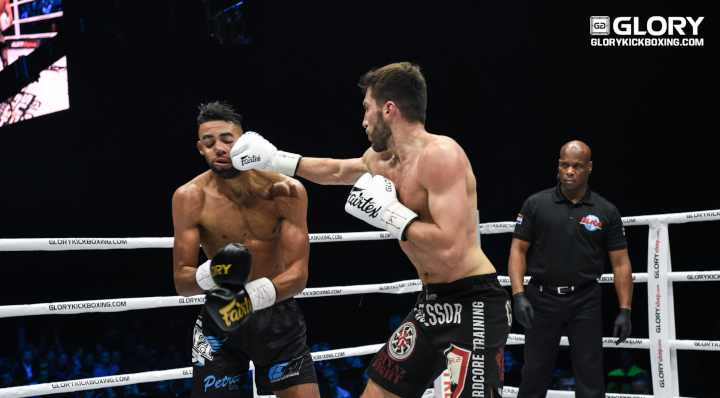 Azerbaijan’s Nabiyev was fighting for the first time since coming up short against current champion Harut Grigorian. Danenberg entered the contest riding the momentum of a tournament win at GLORY 51 in Rotterdam.

Danenberg pushed forward early, while Nabiyev fired low kicks from range. The towering Danenberg looked for his knee strikes, but Nabiyev’s height prevented them from reaching the chin.

Nabiyev picked up his own forward pressure, leading to some wild exchanges between the two Welterweights.

The pressure from Nabiyev continued in the fight’s second round. He came forward with combinations, forcing Danenberg to retreat.

A left hand from Danenberg kept Nabiyev honest, but Nabiyev soon returned the favor, wobbling the Aruban fighter for a moment.

The output of Danenberg waned and Nabiyev began to taunt the taller fighter. A spinning backfist along the ropes from Nabiyev made it clear it was his frame.

Nabiyev’s confidence grew in the fight’s final round. He used his footwork and head movement to taunt Danenberg further. He again cracked Danenberg with a spinning backfist and followed with a left head kick attempt.

Danenberg was visibly frustrated, as he was unable to put together combinations while backing up. A big knee from Nabiyev landed square to Danenberg’s face, but he did not go down.

One of the judges saw the fight for Danenberg, but the other four rewarded Nabiyev for his efforts.