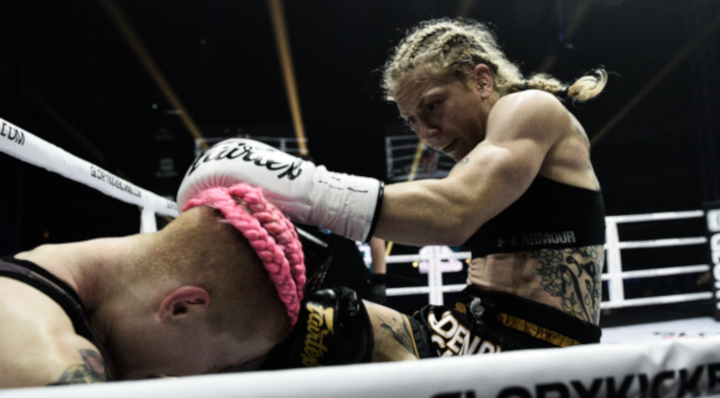 Olofsson marched forward and pressured Silvestre against the ropes immediately. Silvestre looked to brawl with looping punches before Olofsson returned to kicking range. Olofsson backed Silvestre into the corner and unloaded with punches and knees.

Silvestre initiated the clinch out of desperation. The Swede was relentless with her attack, battering Silvestre in the corner with more punches. Olofsson turned her attention to the body of Silvestre late in the frame, as she scored with two kicks and a knee to the midsection.

The aggression and volume of Olofsson did not waver in round two. She again back Silvestre into the corner and delivered combinations. Silvestre threw a spinning backfist, but she connected with a forearm and was warned by the referee.

The left body kick from Olofsson landed at will as Silvestre could not get her back off the ropes. The Swedish fighter fed Silvestre a steady diet of punches to close out the round.

Silvestre opened the final round with an overhand right, but was countered by a left body kick from Olofsson. The Frenchwoman repeatedly backed herself into the corner, trying to alleviate the pressure from Olofsson.

It was futile, as Olofsson continued to tee off on her. Silvestre’s chin held up, but she absorbed strike after strike.

The fight went the distance, but there was never any doubt who had won, as Olofsson took all three rounds on all five scorecards.

“It feels amazing. I love to win,” said Olofsson after the bout. “You always want a finish, but she was tough.”