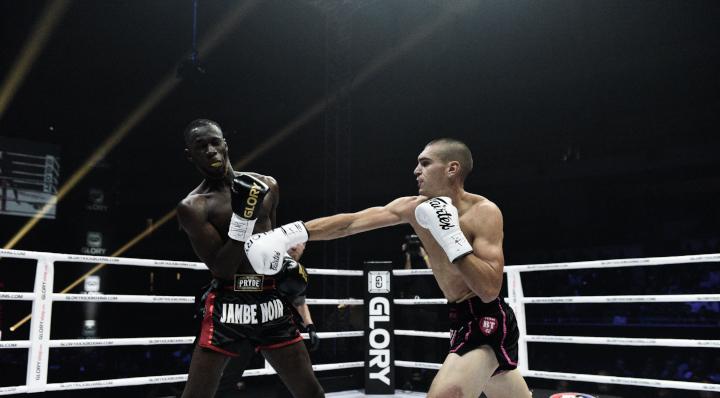 The GLORY 60 SuperFight Series kicked off in Lyon, France with a Lightweight bout between GLORY newcomers Michaël Palandre (26-2, 10 KO’s) and Mohamed Soumah (27-4, 8 KO’s).

Soumah went to work with his punches in the opening round. Once he found his range, he began to unleash kicks. Palandre answered with kicks and of his own, then delivered a heavy right hand that dropped Soumah.

The 20-year-old beat the count and recovered quickly. Despite the knockdown, Soumah taunted and showboated. That would cost him as Palandre again cracked him with a right hand on the temple and a left hand to the jaw. Soumah again beat the count as the round expired.

The success in the first round gave Palandre confidence to start the second round, as he came out firing with combinations. After missing with a punch, Soumah appeared to injure his right shoulder. Palandre did not let up, attacking and earning yet another knockdown. Clearly in pain, Soumah could not continue and the fight was waved off.

“When you fight at home and have your home crowd, there’s nothing that feels better,” said the victorious Palandre. “I saw an opening and went for it. It was certain that I was going to win by KO and I did it.”