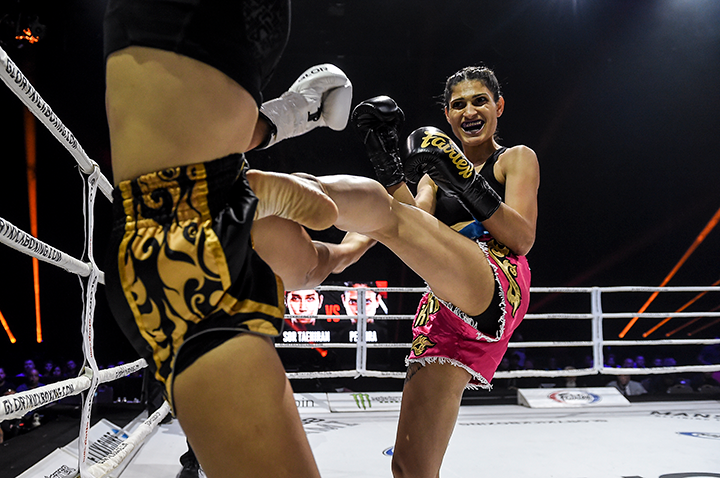 Pereira walked straight into the pocket and backed Chommanee to the ropes. The Brazilian fired a heavy right hand, but Chommanee was able to circle out of the way. Chommanee clinched near the ropes and delivered a series of short knees.

The height and reach advantage of Pereira was obvious, as she stayed outside and threw power punches toward her more experienced opponent. Chommanee landed a right hand and she immediately looked to clinch.

An inadvertent clash of heads caused a massive hematoma on Chommanee’s forehead just before the round’s final bell.

Chommanee went straight back to the clinch in round two. Pereira cracked her with a left hand and she continued to be aggressive with attack. The Brazilian’s power punches were blocked by the high guard of Chommanee.

The pair traded body kicks and Chommanee clinched yet again. The round’s waning seconds saw both fighters fire combinations, but come up short in landing them.

The Thai fighter was warned by the referee early in round three for excessive clinching. A front kick to left hook combo from Pereira found its mark and forced Chommanee to close the distance.

A body kick from Pereira found the midsection of Chommanee and left a considerable red mark. Pereira’s power punching continued until the final bell, scoring with repeated right hands.

The judges were called upon for a verdict, and all three at ringside awarded Pereira for her efforts.

“I’m really, really happy,” said the victorious Pereira. “I’d like to thank GLORY for the opportunity. I’m thankful for my brother [GLORY Middleweight champion Alex Pereira] being at my side.”