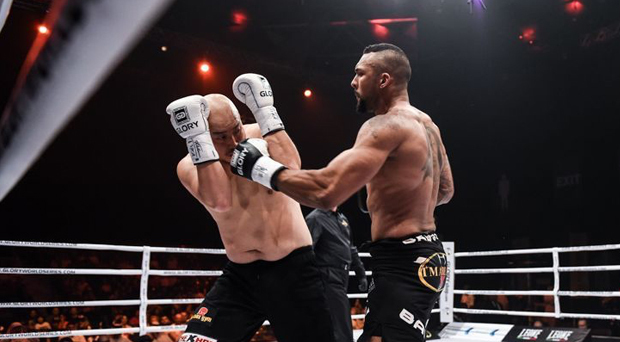 Park, a Tae Kwon Do expert from South Korea, started the fight with a body kick and landed another before Lewis-Parry let his hands go. A right-left combination pushed Park backwards and made him cover up before the finishing blow crashed through his guard.

The punch spun Park as it dropped him and it was immediately apparent that he was badly stunned.

He failed to beat the referee’s count and took several minutes to regain his feet. When he did, he appeared to have sustained a badly-broken nose during the lightning-quick encounter.

“I hit him with this shovel hook we’ve been working on in training. Normally I hook with the palm down but I have got a bit of a thumb injury so we have been throwing shovel-hooks to protect it and it’s actually turned out to be a really good punch for me,” said Lewis-Parry backstage.

“I knew I was going to knock him out, I just didn’t expect it to be that quick. But as soon as I felt the connection I knew he was going down. I did think he would get back up after an eight count but then when he started to try and pick himself up he was wobbling everywhere, you could see he was done.”

Having made his GLORY debut in such stunning fashion, Lewis-Parry wasted no time in sending a message to the rest of the division. He started with American Heavyweight Xavier Vigney, who was set to be his opponent on this card before being moved to GLORY 21 in San Diego.

“Vigney is a bum, let me make that clear,” he said. “I will probably fight him next and he will get what Park got. So that will be two knockouts in a row. I am not here to mess around, I am here to do work.

“Obviously I am new to the Heavyweight division here in GLORY but yeah, I will also happily jump straight in to Top Ten opposition, why not? I have always dived in the deep end, all my life. I’ll fight Rico Verhoeven next week if they want me to.”